On June 24, Lt. Stephen Minehan of the Boston (MA) Fire Department died after leading his company in a successful search for two other trapped firefighters at a blaze in a vacant waterfront warehouse. Minehan apparently became disoriented in the heavy smoke conditions and was separated from his company as they rescued the trapped firefighters. He radioed that he was trapped but several rescue efforts to find him were unsuccessful. He died of smoke inhalation and his body was recovered by his company several hours later. 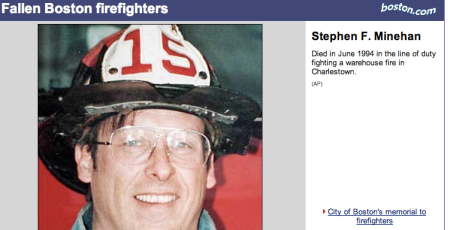 Living in a two-daily town, you’d expect a companion ad in the Boston Herald, right?

Instead, the same ad – inexplicably –  ran in the Globe’s Metro section:

What’s the connection to the Residence Inn Marriott? Tudor Wharf is where Stephen Minehan died, and where a memorial to him was established in 2003.

But, apparently, that’s of no interest to Herald readers.

This entry was posted on Tuesday, June 25th, 2013 at 2:10 pm and is filed under Uncategorized. You can follow any responses to this entry through the RSS 2.0 feed. You can leave a response, or trackback from your own site.