Today this open letter to the Boston Bruins and the City of Boston appeared in the Boston Globe. 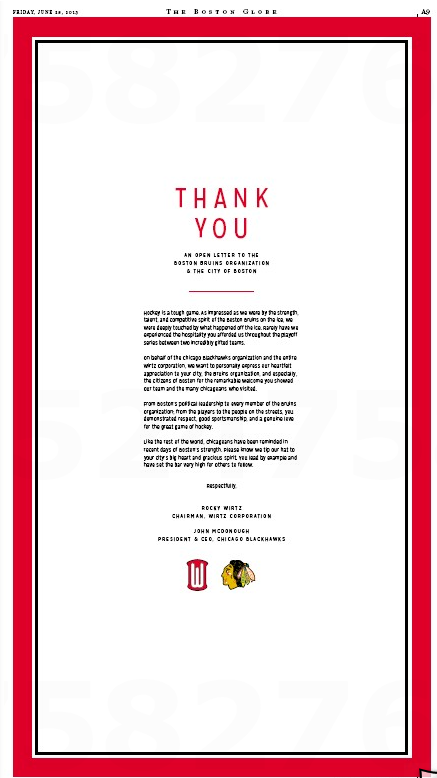 Here’s the text of the letter, which is signed by Rocky Wirtz, Chairman of the Wirtz Corporation and Owner of the Chicago Blackhawks, and Blackhawks President & CEO John McDonough:

Hockey is a tough game. As impressed as we were by the strength, talent, and competitive spirit of the Boston Bruins on the ice, we were deeply touched by what happened off the ice. Rarely have we experienced the hospitality you afforded us throughout the playoff series between two incredibly gifted teams.

On behalf of the Chicago Blackhawks organization and the entire Wirtz Corporation, we want to personally express our heartfelt appreciation to your city, the Bruins organization, and especially the citizens of Boston for the remarkable welcome you showed our team and the many Chicagoans who visited.

From Boston’s political leadership to every member of the Bruins organization; from the players to the people on the streets, you demonstrated respect, good sportsmanship, and a genuine love for the great game of hockey.

Like the rest of the world, Chicagoans have been reminded in recent days of Boston’s strength. Please know we tip our hat to your city’s big heart and gracious spirit. You lead by example and have set the bar very high for others to follow.

So – all those hockey fans/readers of the feisty local tabloid got the same message, eh?

Nope. The message they got was, well, nuthin’. You get nuthin’.

This is the second time this week Herald readers got that message. As the hardreading staff noted, this memorial ad for Lt. Stephen F. Minehan, the Boston firefighter who died in a Charlestown warehouse blaze 19 years ago – this ad ran twice in Monday’s Globe, and no times in the Herald. 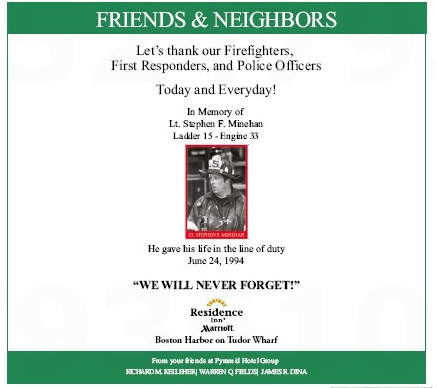 We asked the folks at Pyramid Hotel Group, which owns that Marriott at Tudor Wharf, why it ran twice in the Globe but not in the Herald. No one addressed the latter part, but regarding the double play in the Globe one executive said, “It wasn’t intentional.” So the Globe made a mistake? “We’ll have to wait and see when the bill comes in. But I don’t think it was on purpose.”

An advertising executive at the Globe failed to answer our calls. We’re not holding our breath.

This entry was posted on Friday, June 28th, 2013 at 8:33 pm and is filed under Uncategorized. You can follow any responses to this entry through the RSS 2.0 feed. You can leave a response, or trackback from your own site.

5 Responses to Herald Once Again DisADvantaged