Herald to Globe: Tattoo You!

The Boston Herald gets the Murder Ink award today with this front page: 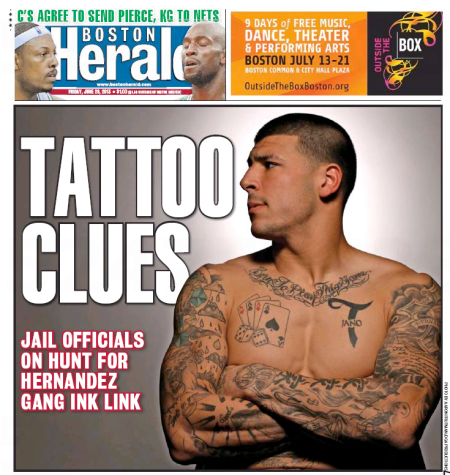 The feisty local tabloid draws a more detailed picture in its lead story on the increasingly lurid Aaron Hernandez investigation.

Fallen Patriots star Aaron Hernandez is at the center of a probe into an unsolved 2012 double slaying in Boston while Dartmouth jail officials are scouring the troubled tight end’s wild array of tattoos for any gang ink links, the Herald has learned.

“We’ll be looking at his tattoos to see if there are any symbols that affiliate with gangs,” said Bristol County Sheriff Thomas Hodgson, who met with Hernandez yesterday after his bail was denied by a Fall River judge. “We have to always be vigilant around security and not place him somewhere where there are rival gang members.”

That would be Media Whisperer Thomas Hodgson, described this way by one Herald commenter: “Biggest self-promoter out there. Wants to [be] Little Joe Arpaio. What a blowhard.” (Watch his cringe-inducing interview with ESPN here.)

“It could also be a gang saying, like ‘smile now, pay later,’ ” [she] said, adding Hodgson’s team  will spot it if they see it.

They’ll spot it if they see it. Beautiful. 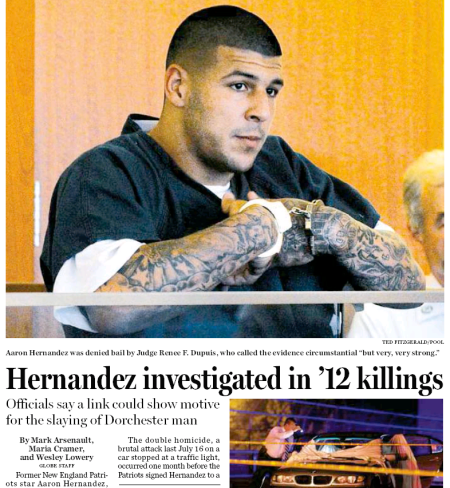 Although Globe reporters also talked with law enforcement officials, there was no mention in the stately local broadsheet about tattoos.

Ink one up for the Herald today.

This entry was posted on Friday, June 28th, 2013 at 6:21 pm and is filed under Uncategorized. You can follow any responses to this entry through the RSS 2.0 feed. You can leave a response, or trackback from your own site.

One Response to Herald to Globe: Tattoo You!