The hardreading staff has noted two instances lately of tribute ads that ran in the Boston Globe but not in the Boston Herald. And so it was with no little interest that we saw this in today’s stately local broadsheet: 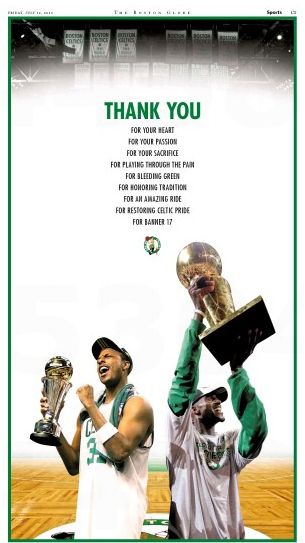 Which sent us scurrying to the Herald to see if it had suffered its accustomed fate. 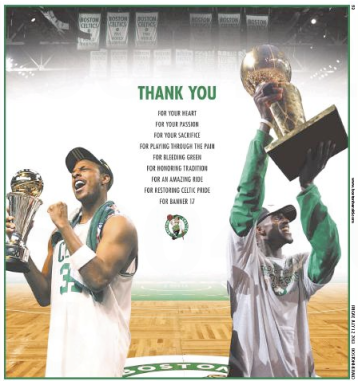 But lest the folks at the Herald start feeling they’re on equal footing with the Globe, witness this from Eric Randall at the Boston Daily blog:

The Celtics took out a full-page ad in Friday’s Boston Globe to thank departing stars Kevin Garnett and Paul Pierce for “bleeding green” all those years. It’s a nice move that you don’t see teams pull out for just any departing players.

But then, nor is it any surprise that Pierce and Garnett would merit special attention . . .

Moral of the story: Someone’s always ignoring the Herald somewhere.

This entry was posted on Friday, July 12th, 2013 at 5:06 pm and is filed under Uncategorized. You can follow any responses to this entry through the RSS 2.0 feed. You can leave a response, or trackback from your own site.