It’s time someone called Social Services. The Boston Herald’s abuse of its news pages is now bordering on the criminal.

For months the Herald has been flogging its Wayne’s World webcast Press Party in the news pages, à la this from today’s page two:

Now the Herald has gone all Mickey Rooney over Internet radio.

(Hey, kids! Let’s put on a radio station! We can use Pat Purcell’s garage!)

That, of course, calls for all the newsvertising that fits, which up to this point has involved half of Page One. But apparently that’s not enough, because today the dicey local tabloid gives it two-thirds.

Plus, it goes without saying, the obligatory inside spread: 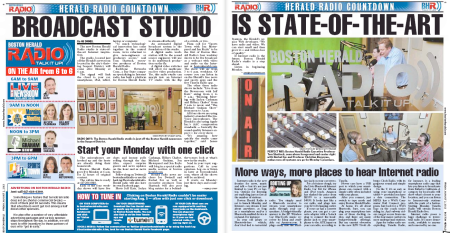 (Come to think of it, if it goes without saying, why do we still say it? And don’t you come to think of everything you write or say? Who comes up with this stuff?)

Hard to say what’s most striking about today’s hoopla, but that “state-of-the-art” claim is a good place to start. As the redoubtable David Bernstein tweeted:

As for the rest of today’s spread, it’s just one big advertisement in news drag.

You’d think real journalists would be embarrassed to stoop to this.

Then again, it is the Herald.

This entry was posted on Friday, August 2nd, 2013 at 8:06 pm and is filed under Uncategorized. You can follow any responses to this entry through the RSS 2.0 feed. You can leave a response, or trackback from your own site.

One Response to Hark! The Herald! (Internet Radio Edition Umpteen)