Preliminary indications are that our feisty local tabloid is taking a pass on the Boston mayoral race. The first competitive City Hall election in 20 years is apparently less important than the non-existent political career of a certain Scott Brown (R-Nowhere).

Monday it was Brown traipsing around Iowa that earned him Page One of the Herald.  (Q: What’s the difference between Scott Brown and the Iowa State Fair butter cow? A: The cow will participate in the 2016 Iowa presidential caucus.)

Today the big news is that Brown continues not to run for governor. So that’s front-page material too. 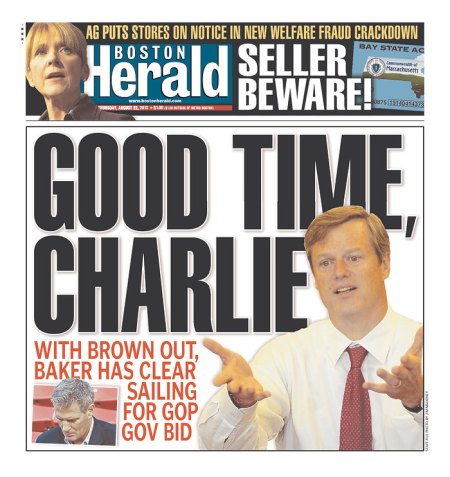 But while the Herald recites Make Way for Charlie, a real campaign has broken out in the Boston mayoral race, mostly around City Councilor (and current co-favorite) John Connolly. 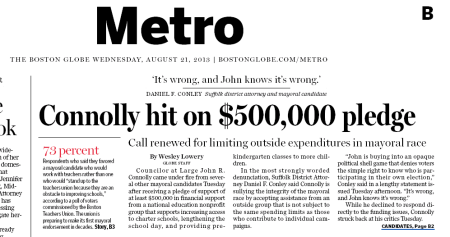 So, to recap: Stand for Children, a national education non-profit, says it’s going to dump half a million bucks into the race. Initially no response in Monday’s Globe from the object of the kibitzer’s largesse. Rival candidates scream bloody murder. One proposes a People’s Pledge.  Connolly bites back at critics in Tuesday Globe, but still doesn’t say anything about the Stand for Children loot. Rivals scream louder. Wednesday, Connolly says he he won’t take the dough, but says People’s Pledges are just a gimmick – no wait – he signs the pledge.

Meanwhile, the Herald isn’t reporting much of anything or even recycling Globe stuff the way it sometimes does. Thank goodness, though, for the Herald editorial page, which has noticed there’s a mayoral race. 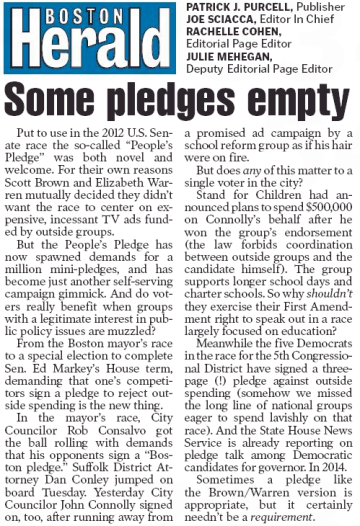 The Herald agrees with what Connolly used to believe: “[The People’s Pledge] has become just another self-serving campaign gimmick.”

But fun to watch, yes? As long as someone’s covering it.

This entry was posted on Thursday, August 22nd, 2013 at 6:54 pm and is filed under Uncategorized. You can follow any responses to this entry through the RSS 2.0 feed. You can leave a response, or trackback from your own site.

One Response to Boston Herald a Day Late, $500,000 Short on Mayoral Race