Hark! The Howie! (Baby, I Can Drive My Carr)

Whitey Bulger is going away for whatever’s left of his miserable life, and no one’s going to miss him more than Boston Herald scribe Howie Carr. 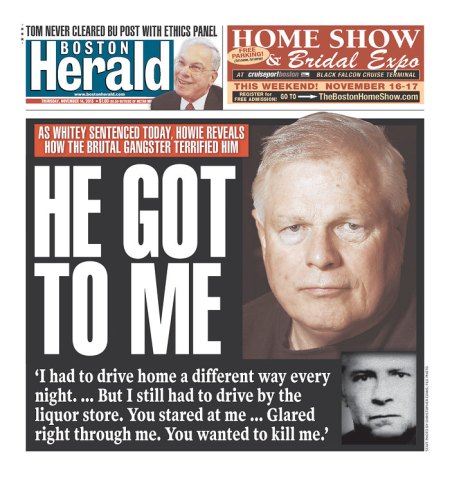 This stuff is pasteurized processed American Carr, the Velveeta of reporting. Today’s slice tastes just like they all do.

Columnist recalls terrifying days of looking over his shoulder

Whitey Bulger, you wanted to kill me, but I’m still alive.

And you’re dead. You’re not going to last long in a real prison, you bully, you coward.

I heard you’ve told some of the guards down at Plymouth you would have killed me for sure but you were concerned about blowback on your brother, who by the way didn’t show up one single day at your trial.

Hell, Whitey himself barely showed up for it. No way Billy was going to.

And now Carr’s going have to find some new targets for his drive-bys.

Something tells us he won’t look very far.

This entry was posted on Thursday, November 14th, 2013 at 2:34 pm and is filed under Uncategorized. You can follow any responses to this entry through the RSS 2.0 feed. You can leave a response, or trackback from your own site.