What will the Boston Herald do when Tom Menino vacates the corner office at City Hall?

Probably a  lot more of this: 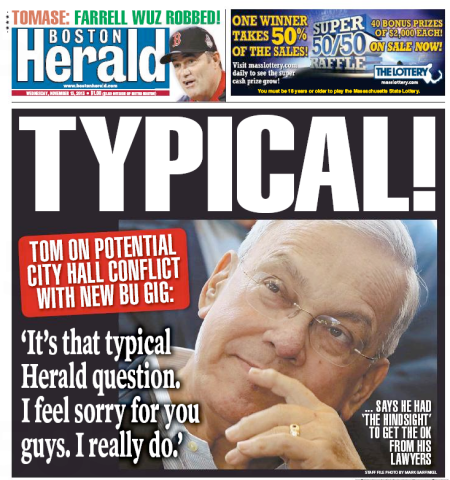 Inside, Menino sort of answers the question.

Menino: Ties to B.R.A. no problem with BU post

Mayor Thomas M. Men­ino brushed off conflict-of-interest concerns about his new Boston University gig as a “typical Herald question,” even as the school — which has  enjoyed a building boom during his administration — is seeking approval from the Menino-appointed BRA to develop its Commonwealth Avenue campus and South End medical facilities.

State ethics laws say  elected officials should avoid even the appearance of a conflict. Menino, who faced similar scrutiny while considering a job at Harvard University, cut a Herald  reporter off halfway through the BRA question.

“It’s that typical Herald question. I feel sorry for you guys. I really do,” Menino said, adding that his legal team gave him the green light to take the job. “I’ve been  extremely cautious about that issue. I’ve been overly cautious. It’s good to have the hindsight to deal with this  before it becomes a problem.”

That’s, well, problematic for the feisty local tabloid, which provides this helpful graphic of some past and future BU developments. (Full disclosure: The hardreading staff moonlights as a mass comm prof at BU.) 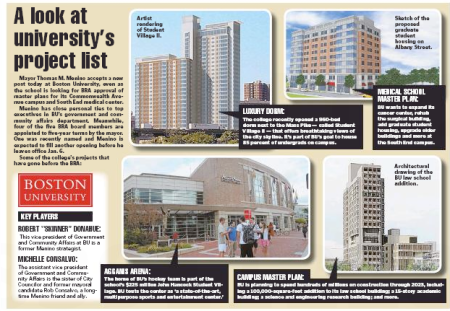 And then there’s this handy punch list of current projects:

• A 15-story, 250,000- square-foot academic building at Commonwealth  Avenue and Granby Street, approved as part of the school’s 10-year master plan;

• A 150,000-square-foot life-sciences and engineering building, up for approval at the BRA’s meeting tomorrow, and

So no conflict of interest there? You can almost hear Menino thinking, How does that conflict with my interests?

The Urban (Studies) Mechanic even takes a swipe at predecessor Kevin White, who upon leaving office, the Herald writes, “accepted a BU teaching job some saw as a quid pro quo for brokering a deal to help the school build a multimillion-dollar science center.”

Ouch. When does the statue of Menino kicking the Kevin White statue in the shins go up in front of Faneuil Hall?

This entry was posted on Wednesday, November 13th, 2013 at 4:21 pm and is filed under Uncategorized. You can follow any responses to this entry through the RSS 2.0 feed. You can leave a response, or trackback from your own site.