As the hardreading staff has previously noted (here too), the Boston Globe has been pretty loosey-goosey in meeting its disclosure responsibilities about John Henry’s dual ownership of the Globe and the Boston Red Sox.

And today the Globeniks extended their slump.

Some Fenway fans apparently have insatiable appetites — but not necessarily for baseball.

Hoping to capitalize on Red Sox Nation’s hunger for Fenway Franks, the organization plans to start selling the famous hot dogs outside the ballpark, at a 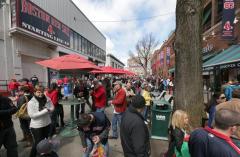 Lansdowne Street concession stand. Even when a game isn’t on the menu.

Boston’s Zoning Board of Appeals on Tuesday gave unanimous approval for the stand, which will also serve other food and nonalcoholic beverages. The opening date and hours of operation have not been set, but the Red Sox plan to have it up and running this season, said spokeswoman Zineb Curran.

And etc. But nowhere does the piece acknowledge that John Henry’s newspaper is reporting on John Henry’s corporate interests.

Hey, Boston Globe Publisher Henry:  Hasn’t anyone told you that it could be bad for business if people start viewing your paper as the Fenway Gazette & Papi?

We think you know the answer to that.

This entry was posted on Wednesday, March 12th, 2014 at 1:09 pm and is filed under Uncategorized. You can follow any responses to this entry through the RSS 2.0 feed. You can leave a response, or trackback from your own site.

One Response to Once Again, Boston Globe Less Than Fenway Frank