The Boston Herald’s Michael Silverman got an email interview with Boston GlobeSox owner John Henry, which, of course, was Page One news for the feisty local tabloid. 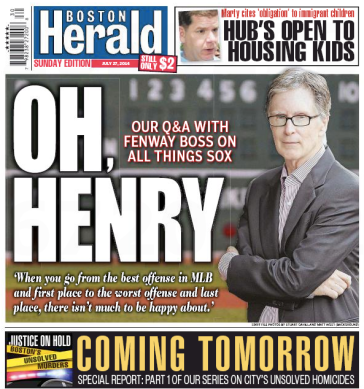 The email exchange between Silverman and Henry was pretty much what you’d expect.

The Red Sox are genuinely perplexed.

Barely more than two weeks ago, principal owner John Henry was told by his general manager that the Red Sox “are probably the

best team in the division. We just aren’t playing like it.”

The reasons behind the team’s incredibly underwhelming and disappointing caliber of play for most of the first four months of the season are not clear to Henry and the front office. With the trade deadline looming Thursday, Henry and his baseball operations people have been trying to get a better handle on what’s gone wrong and discover if there’s time left to fix it.

It’s not exactly riveting stuff – when Silverman asks if the Sox are sellers or buyers, Henry replies, “We’ll see what happens (this) week.”

But there is one juicy item in the piece: A not-so-veiled reference to this from Boston Globe scribe (and Henry employee) Dan Shaughnessy last Sunday (reproduced in full for, well, full effect).

When did Boston go so soft on the Red Sox?

At this hour, your Boston Red Sox enjoy a friendlier environment than almost any of the 30 teams in baseball. The Sox have a chance to finish in last place for the second time in three years, win a playoff game in only one of six seasons, and still be perceived by their fans as “perennial contenders.’’ The Sox can play nine games under .500 for the first 95 games and still have a Nation of believers thinking they can win the division, or compete for the phony second wild card. Sox owners can pare payroll ($72.5 million scheduled to come off the books for next year), stay well below the coveted luxury tax threshold, and listen to regional applause while fans pay the highest ticket prices in baseball. The Sox can get folks to buy into the notion that it’s foolish to compete in the open market for the services of their best pitcher. Sox tickets and merchandise are hotter than they were at this time last summer and Pat Moscaritolo, president of a Boston tourist group, says, “For the past 10 years that I’ve been tracking visitor spending and the economic impact of the Red Sox, it’s almost unaffected by the team’s performance.’’

The Sox were positively surging with five wins in six games against terrible/mediocre teams (aggregate 21 games under .500) as they prepped for the Royals Saturday night. The KC-Boston matchup is a good one, since it sometimes sounds like the Sox want to be a middle-market team. Like the Royals of recent decades (29 years since making the playoffs), the Sox now sell the fans on “watching the kids.” Don’t people realize that EVERY team has a farm system stocked with young players who’d love to play in front of sellout crowds in the moribund final months of a season? It amazes me how soft this baseball market has become. In 1978 fans and media crushed the Sox for a 99-win season that concluded with eight consecutive pressure-packed victories. The Boston manager was unmercifully booed on Opening Day the following year. Now everything is awesome because the Boston ballpark is a tourist destination and fans fall in love with the hype of every young player coming through the system. Swell. When did we become St. Louis?

Ouch. The only thing Shaughnessy left out? That the principal owner of the GlobeSox etc. etc.

Regardless, how much fun is it that Henry employed his own crosstown rival to dope-slap his wayward minion, saying this:

“Fans continue to sell out Fenway. They’ve suffered through some really bad games this year, but they continue to show up and the mood at the park among the fans is very positive when I walk through the stands. Before Tom [Werner], Larry [Lucchino] and I arrived I believe fans had less patience.

“A loud curmudgeon I know accuses them of being soft, bad fans — but anyone paying attention knows the mood has changed at Fenway over the years. People expect good things from the Sox and really love being at Fenway. This team accomplished something very special last year therefore the fans aren’t about to not give them the benefit of the doubt.”

This entry was posted on Sunday, July 27th, 2014 at 3:11 pm and is filed under Uncategorized. You can follow any responses to this entry through the RSS 2.0 feed. You can leave a response, or trackback from your own site.