Nice piece on Page One of Boston Globe Sports today about Patriots lineman Vince Wilfork and his comeback from a torn Achilles’ tendon. 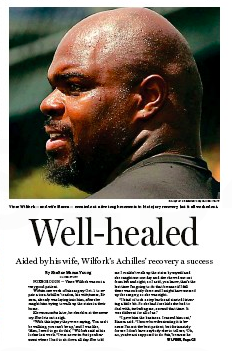 The report by Shalise Manza Young focuses on all the help Wilfork’s wife Bianca gave him in his rehab efforts. But . . . it doesn’t have one picture of her, even though she’s the central figure in the story.

C’mon, you guy in the Globe toy department. Play fair.

P.S. The piece alongside the Wilfork story is about women becoming bigger players in fantasy football leagues. Go figure.

This entry was posted on Sunday, September 7th, 2014 at 2:19 pm and is filed under Uncategorized. You can follow any responses to this entry through the RSS 2.0 feed. You can leave a response, or trackback from your own site.