Today’s Boston Herald goes to town on local boy gone bad Ahmad Abousamra, the Stoughton man wanted for terrorism and suspected of being a social-media guru for ISIS/ISIL/Islamic State – whatever name they’re going by these days.

Inside, the Terror Techie gets the Full Osama. 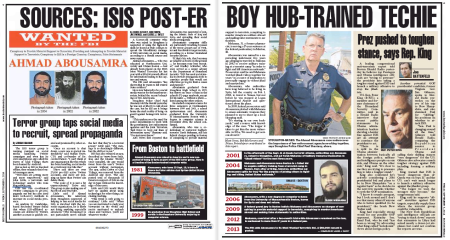 The news report itself is straight out of Tabloid 101 (with four – count ’em, four – bylines):

A 32-year-old computer whiz who was raised in Stoughton is suspected of using the high-tech skills he honed at Hub colleges to spread the bloodthirsty message of ISIS terrorists on social media, according to a Herald source and news reports.

Ahmad Abousamra — who was educated at Northeastern University and UMass Boston — had already been placed on the FBI’s Most Wanted Terrorists list last year with a $50,000 reward offered for information leading to his capture and return.

The FBI said Abousamra “has shown that he wants to kill United States soldiers.”

He is now believed to be a social media warrior for the heartless terrorists behind the recent beheadings of two Americans.

Crosstown at the Boston Globe, Abousamra gets more measured treatment:

The spotlight that has been cast on the Islamic State terror group in Syria has also put a new focus on a Massachusetts man wanted for terrorism, who is believed to

be living in that country and possibly supporting ISIS.

Ahmad Abousamra, who grew up in Stoughton and attended schools in the Boston area, faces terrorism charges in federal court in Boston, and the FBI in December put him on its Most Wanted Terrorists list. A $50,000 reward has been offered for information leading to his capture, and officials believe he has been living in Aleppo, Syria.

The Globe story did contain one fact the Herald missed: “Lowell Police Sergeant Thomas Daly – a member of the FBI’s Joint Terrorism Task Force . . . said Abousamra has a ‘high-pitched voice that would distinguish him from others.’'”

Presumably not, however, as high-pitched as the freaky local tabloid’s.

This entry was posted on Friday, September 5th, 2014 at 11:57 am and is filed under Uncategorized. You can follow any responses to this entry through the RSS 2.0 feed. You can leave a response, or trackback from your own site.