From our Late to the Going-Away Party desk

Good Friday turned out to be Bad Friday for Store 2024.

As in, all news was bad news for the local machers mucking up the bid for the 2024 Summer Olympics.

Start with yesterday’s Boston Globe (which has generally taken pity on the totally inept Boston 2024niks), where two – count ’em, two – columnists wrote MISTIA (More in Sorrow Than in Anger) pieces about the botched bid.

In all the hand-wringing over the mess that is Boston’s Olympics bid, Doug Rubin has managed to escape scrutiny.

Boston 2024 is awash in problems — and none bigger is the group’s ability to get its message across that the Games can make Boston a better version of itself. The Olympics are supposed to be a feel-good event, but not here. Instead, the Games are toxic, as if organizers are proposing to build a nuclear waste dump on the Greenway.

There’s plenty of blame to go around, from Boston 2024 chairman John Fish to our naysaying selves. But Rubin and his firm Northwind Strategies are most responsible for making sure the public understands why hosting the Summer Games could be good for Boston.

Which the public assuredly does not.

Next, Scot Lehigh on the Globe’s op-ed page:

The threshold question that Boston 2024 faces is crystal clear. Well before the public vote, the group will need to present a convincing plan showing how Boston (or Greater Boston) can host the 2024 Summer Games without putting taxpayers at risk.

So far, what we have are professions of good intentions. “Tax dollars will not be used to build venues or pay for the operation of the Games,” Boston 2024’s new briefing book asserts.

The reality, however, is that at some point, Boston will have to guarantee that the various Olympic venues will be ready. And that means the city could have to step to the plate if plans go seriously awry. Given the deep opposition to using public dollars for the Games, it’s difficult to see how Mayor Marty Walsh could put Boston in that position without an air-tight assurance that taxpayers won’t be left holding the bag.

Crosstown at the Marty Walsh Gazette (a.k.a. the Boston Herald), the marty local tabloid – which had been a sort of house organ for City Hall until being thrown under the buss on Thursday – was silent yesterday on all matters Olympic.

Which brings us to Friday’s New York Times drive-by hooting. 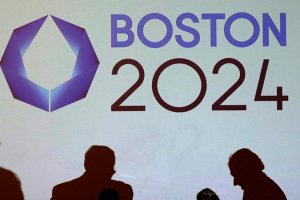 After completing its long, complicated and anything but transparent process of choosing a city as its candidate to host the 2024 Summer Games, the United States Olympic Committee has found itself in an awkward position.

Boston, the city the committee chose to represent the United States, does not appear to want to host the Games at all.

Too expensive, some Bostonians say — the money used to host the Games should be dedicated to improving schools and social programs. Too many people, others say — Boston has terrible traffic, so why invite thousands more to further clog the streets?

Too unnecessary, say those personally hurt by the notion that the Olympics could improve Boston’s image worldwide: Why does Boston need the Olympics to validate it as a world-class city when Bostonians are perfectly happy with Boston as it is?

Except they’re not. Never really have been.

But Bostonians are even less happy with the Olympics. Then again, that’s just one of many problems with the town’s bid. And so, according to the Times, the endgame is near, in the form of the 2016 statewide referendum Boston 2024 has promised.

If recent history is any guide, that public vote will deal the fatal blow to Boston’s chances. Voters in Munich; St. Moritz/Davos, Switzerland; and Krakow, Poland, all batted away their bids for the 2022 Winter Games. Vienna retreated from its 2028 Summer Games bid after a vote, too.

Everyone under the sun has denied this week’s Wall Street Journal report that “the U.S. Olympic Committee may drop Boston’s bid to host the 2024 Summer Games if local support doesn’t improve soon.”

Oh, right – we had forgotten that one: Bostonians are unpatriotic if they don’t support this game of five-ring monte.

Please, someone, put these people out of our misery.

This entry was posted on Saturday, April 4th, 2015 at 11:40 am and is filed under Uncategorized. You can follow any responses to this entry through the RSS 2.0 feed. You can leave a response, or trackback from your own site.