Gretta Love Hath No One Than the Boston Herald

As the hardreading staff has noted on two occasions, the Boston Herald’s weekly Gretta Style column – written by fashion butterfly Gretta Monahan – is little more than free advertising space for Monahan’s retail store and hair salon. The problem is, it’s dressed up like editorial content. 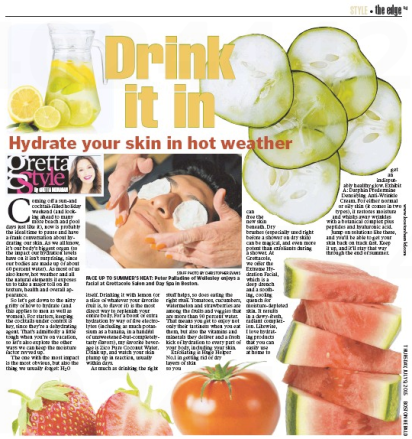 And where would one go to seek proper hydration? To Grettacole Salon and Day Spa, of course, which gets two plugs in the piece. (This, by the way, is the third week in a row Grettasomething is the solution for all your fashion/beauty needs.)

As we previously mused, one of three scenarios is likely involved here:

1) The Herald is paying Monahan to produce these features, which is a crime against common sense.

2) Monahan is paying the Herald to produce these features, which is a crime against journalistic ethics.

3) No money is changing hands, which is a crime against Herald readers.

To discern which option is at play, we called Ms. Monahan and emailed Herald Lifestyle Editor Sandra Kent to ask two simple questions: Are there guidelines for how often Gretta Monahan can feature her store and/or salon in the column? And, is Gretta Monahan paid for producing the weekly column?

We have heard back from neither. Nor do we expect to. But the selfie local tabloid should really stop pimping out its pages this way.

This entry was posted on Thursday, July 9th, 2015 at 4:27 pm and is filed under Uncategorized. You can follow any responses to this entry through the RSS 2.0 feed. You can leave a response, or trackback from your own site.