A Trial of Two Cities

There are currently two high-profile trials in the Boston area involving young people, but the local dailies only see one. Different ones.

The Boston Herald has gone all in on the involuntary manslaughter trial of Michelle Carter, who prosecutors say hounded New Bedford teen Conrad Roy into committing suicide last year. 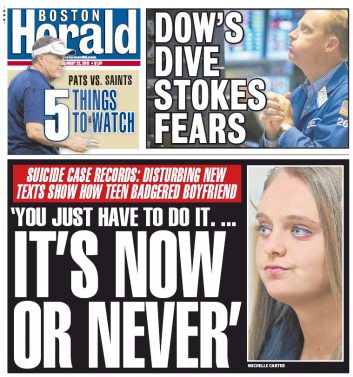 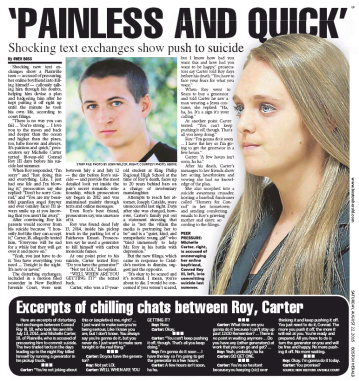 Grandmother: No ‘moving on’ from tragic death 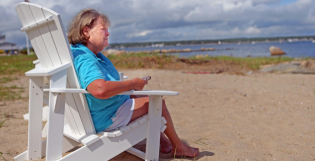 Janice Roy stood in her Mattapoisett backyard looking out at beautiful Buzzards Bay as she  recalled her oldest grandchild, who prosecutors say took his own life last summer under pressure from his girlfriend.

A few hours earlier yesterday, Janice had sat through a gut-wrenching hearing in New Bedford Juvenile Court, where the attorney for Michelle  Carter — the Plainville teen charged with causing the death of her beloved grandson — argued to have the involuntary manslaughter charge against her thrown out.

In one of thousands of text message exchanges, Carter told 18-year-old Conrad Roy III that his family would “get over” his suicide and “move on.”

That couldn’t be further from the truth.

Crosstown, the Boston Globe has limited its coverage of the Michelle Carter trial to a B2 news brief today.

On the other hand, the stately local broadsheet is all over the case of Owen Labrie, the prep-school graduate accused of raping a 15-year old girl last year. We count seven pieces on the trial in the past week, with this one on Metro Page One today.

Labrie said he had sex with girl, peers testify

CONCORD, N.H. — In often crude language, four current and former students at St. Paul’s School testified Monday that Owen Labrie told them he had sex with a 15-year-old 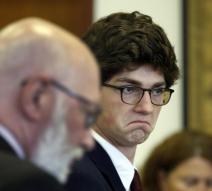 girl who accuses him of rape, undercutting claims by Labrie’s defense team that the two did not have intercourse.

Andrew Thomson, who was Labrie’s roommate at the elite Concord prep school, testified that Labrie told him on the night of the alleged attack in May 2014 that he had taken the teenager’s virginity.

“He seemed a little taken aback, but overall happy” after the encounter, said Thomson, now a student at Brown University. “He seemed to be in a good mood.”

Not so much anymore, though.

The feisty local tabloid, meanwhile, has had nothing about the Labrie trial in its print edition, and just this Associated Press report on the web.

The hardreading staff isn’t sure there’s some deeper meaning in the split decision by the papers; we just know – say it with us – it’s good to live in a two-daily town.

This entry was posted on Tuesday, August 25th, 2015 at 2:09 pm and is filed under Uncategorized. You can follow any responses to this entry through the RSS 2.0 feed. You can leave a response, or trackback from your own site.

One Response to A Trial of Two Cities