The hardreading staff normally likes to ignore Boston Herald columnist Howie Carr(toon), but every now and again we just can’t help ourselves.

Herald Track Gal Gayle Fee has this update today on that fundraiser the autoheirotic Ernie Boch Jr. is throwing at his $30 million Norwood manse for Donald Trump. 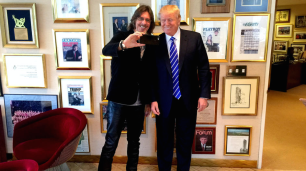 Car czar Ernie Boch Jr. said the guest list for his Aug. 28 private fundraiser for Donald Trump now tops 700 and his office has fielded hundreds of calls from fans of the White House wannabe who want in.

“People are calling me who I haven’t talked to in 30 years!” Boch told the Track. “This thing is more popular than I ever imagined — and it’s pretty bipartisan. This is not a Republican gathering by any stretch of the imagination.”

Boch said he’s even heard from a handful of Democratic officials who want to come to the event but who can’t, for obvious reasons, write a check to the GOP presidential hopeful.

“That’s why were doing cash or check at the door,” he said.

File under: Keep on spinnin’.

This entry was posted on Wednesday, August 19th, 2015 at 2:31 pm and is filed under Uncategorized. You can follow any responses to this entry through the RSS 2.0 feed. You can leave a response, or trackback from your own site.