One by one, Boston is losing its dive bars.

There’s a hole in the ground on West Broadway in Southie where the Cornerstone Pub once stood, the bar and its 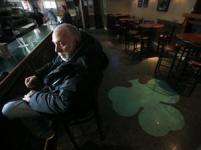 A few blocks away, on A Street, Bob Desimone, the owner of the Williams Tavern, is still pouring beer for his regulars, but not for much longer. At 69, he’s retiring and a developer is seeking approval to replace the one-story brick building with The Residences at One Hundred A.

But what about all the Brookline dive bars that have taken a dive over the past several decades?

There was Jacquals, which is now the Village Smokehouse.

And The Charlton, which is now the Coolidge Corner Clubhouse.

But best of all was Irving’s, a bar most Brookliners wouldn’t enter at gunpoint. For that very reason, it was the hardquaffing staff’s favorite watering hole for decades.

It also helped that the sign said IRVING’S LOUNCE.

Some highlight of the Irving’s Era:

1) We had our bachelor party at Irving’s, which the Missus crashed.

2) We have always insisted on living within walking distance from Irving’s. 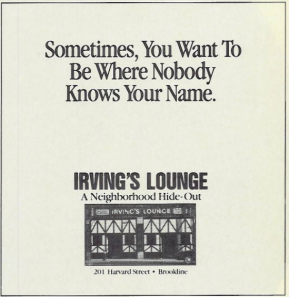 That was actually one of a series of ads. Another one had the headline “When the phone rings at Irving’s, the barkeep asks ‘Is everybody here?'”

Anyway, Irving’s is now the Corrib Pub, and the hardlyquaffing staff still goes there. But we do miss the Lounce acts.

This entry was posted on Friday, February 19th, 2016 at 2:52 pm and is filed under Uncategorized. You can follow any responses to this entry through the RSS 2.0 feed. You can leave a response, or trackback from your own site.