As the hardreading staff has noted many many many times, memorial/institutional/advocacy advertising in the local dailies almost invariably migrates to the Boston Globe – and the Globe alone.

The ad war over demolishing the Prouty Garden at Children’s Hospital, however, is the exception that’s proving the rule.

Last week’s setback for Children’s, in which the Department of Public Health forced the hospital to postpone its plan to replace the garden with a billion-dollar expansion pending a cost study, has seemed only to increase the hospital’s desire to win the battle for public opinion.

Unusually, the ad did not run in the Globe. But that doesn’t mean readers of the stately local broadsheet were deprived of Children’s spin du jour. Instead of an ad, they got this op-ed by Sandra Fenwick, president and CEO of Children’s. 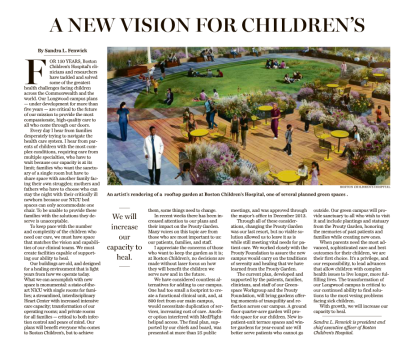 Hey – why buy the cow when the milk is free, eh?

Let’s see if the Save the Prouty Garden folks get equal op-ed time.

This entry was posted on Thursday, February 18th, 2016 at 4:50 pm and is filed under Uncategorized. You can follow any responses to this entry through the RSS 2.0 feed. You can leave a response, or trackback from your own site.