Skunk Already at the Prouty Garden? 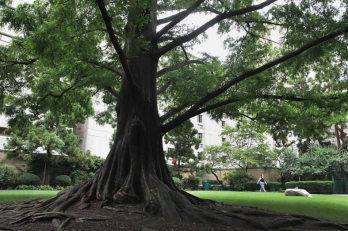 When we last left the tug-of-war over demolition of the Prouty Garden at Boston Children’s Hospital three weeks ago, it was pretty much in limbo.

There was a hearing before representatives of the Massachusetts Public Health Council, which has final authority over the project to replace the garden with a billion-dollar expansion.

And Massachusetts Attorney General Maura Healey had “declined a request by opponents to block Boston Children’s Hospital from building an 11-story addition where the beloved Prouty Garden currently sits,” according to a Boston Globe report.

Except this, yesterday, from splendid reader SFR:

The skunk at the party is the chainsaws that have ALREADY started taking down trees and bushes in the Prouty Garden, before the new building is even approved; this shows beyond a shadow of a doubt there is a very strong and real desire to destroy Prouty, whether a building goes up or not. The “Friends of Prouty” failed to anticipate this, and did not get a restraining order against the hospital to prevent this destruction. Even if the new building is denied by DPH, by the time the decision is made, what’s left of Prouty will be dirt and saw dust.

This is the way the Prouty Garden ends? Not with a bang but a whimper?

This entry was posted on Monday, March 21st, 2016 at 9:50 am and is filed under Uncategorized. You can follow any responses to this entry through the RSS 2.0 feed. You can leave a response, or trackback from your own site.

3 Responses to Skunk Already at the Prouty Garden?