Start with the Boston Herald piece by Jordan Graham and O’Ryan Johnson.

Bundles of bills found in bag 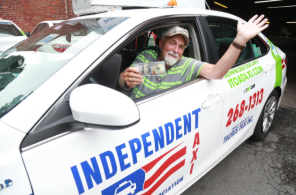 A Boston cabbie is being praised as a good Samaritan after finding and returning a passenger’s inheritance — nearly $200,000 in cold hard cash — accidentally left in the back of his taxi.

“Fifty percent of people say, ‘Yeah, you should have done that.’ The other 50 percent say, ‘You should have took it,’ but I’m not a crook,” said Raymond MacCausland, who found the green backpack filled with approximately $187,000 in cash in his cab on Saturday. “I always return things.”

Even the really big ones, apparently.

As for the absent-minded passenger, who told MacCausland he was homeless and moving into a motel, he wasn’t talking – at least to the Herald.

Reached by phone after the money was returned, the passenger declined to comment.

Crosstown at the Boston Globe, however, it was a slightly different story in Nestor Ramos’s hands.

[W]hile MacCausland was driving around Back Bay with a small fortune in a tattered backpack, the man to whom the money belonged wasn’t worried.

Beyond that, Ramos also generated this gem:

Standing outside his hotel on Tuesday, the heir said he was going to take a year to recover from many months of homelessness and decades of hard living. He checked into a hotel and was still getting used to not having to hide his meager things from overnight thieves.

After that, he wasn’t sure: He’d been trying to find an apartment, but his credit is disastrous. He says he has more inheritance money coming in the years ahead, but was unsure of the terms.

Note to Mr. Butterfingers: If you need a taxicab in Prague, check here.

This entry was posted on Wednesday, July 6th, 2016 at 1:36 pm and is filed under Uncategorized. You can follow any responses to this entry through the RSS 2.0 feed. You can leave a response, or trackback from your own site.