State of the Cuisinart Marketing in the Boston Dailies

It’s not as if the Boston Globe and the Boston Herald have stuck advertising and editorial into a blender and hit puree. But they’re getting closer. Take, for example, today’s editions of the local dailies.

What we have here is a half-page ad for Parker Professional Driving School right beneath an article about the school with this sort-of byline.

So, from all appearances, Parker paid for roughly five-sixths of the page but only half of it is clearly an ad. About a week ago there was a similar aditorial in the Arts section of the stealthy local tabloid. 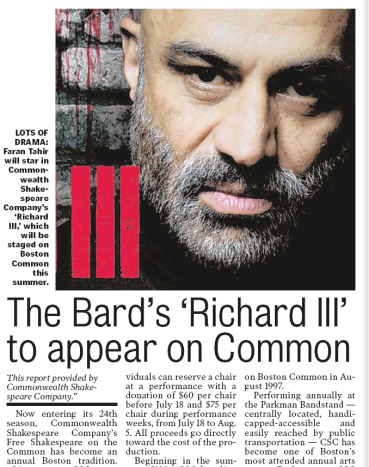 To be clear, transparency is the responsibility of the media outlet, not the advertiser. Here’s how the aditorial dance works: The less it appears to be an ad, the better it is for the advertiser, since the content can bypass the consumer’s factory-installed skepticism about advertising. As the hardreading staff has previously noted, the trend at the Herald is definitely toward minimal transparency.

Crosstown at the Boston Globe, the $tately local broadsheet has allowed a marketer to get to second base with Love Letters columnist Meredith Goldstein. As we previously noted, ever since April the column has been leased out to – sorry, presented by – the Kripalu Center for Yoga and Health. Today, the relationship got even chummier.

To be clear, there’s no stealth involved in this pairing – it’s all entirely transparent. But there’s a growing monetization of editorial content occurring at the Globe (see here and here) that brings to mind the term “slippery slope.”

This entry was posted on Tuesday, June 5th, 2018 at 1:31 pm and is filed under Uncategorized. You can follow any responses to this entry through the RSS 2.0 feed. You can leave a response, or trackback from your own site.