As the hardreading staff has previously noted, the Boston Globe had no immediate reaction to last Sunday’s Non Sequitur comic, which contained what was widely described as a “profane and vulgar” message to Donald Trump inviting him to do something, well, anatomically impossible.

All week newspapers have been busy dropping the strip (The Daily Cartoonist stopped counting at 45), and today the Globe followed suit with this Page 2 editor’s note. 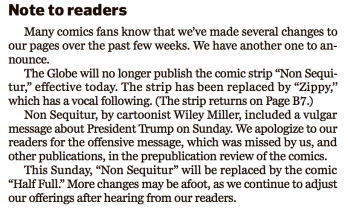 Globe readers got this.

If Non Sequitur had to go (which, in truth, it didn’t), Zippy the Pinhead is an excellent replacement.

To be sure, there were a couple of protests on Twitter.

But that’s pretty much all the blowback we saw.

According to the editor’s note, the Sunday Globe will continue to stiff Zippy, opting instead for Half Full, which is, to be fair, half funny.

This entry was posted on Thursday, February 14th, 2019 at 6:31 pm and is filed under Uncategorized. You can follow any responses to this entry through the RSS 2.0 feed. You can leave a response, or trackback from your own site.