During the past few months, the flimsy local tabloid has all but ignored U.S. Labor Department efforts to recover about $2.7 billion in overpayments of federal pandemic jobless benefits to Bay State residents.

Here’s the extent of the coverage by the purported champion of the working class, but not so much the out-of-work class.

The Boston Globe, by contrast, has been on Massachusetts Gov. Charlie Baker like Brown on Williamson over the clawbacks. Here’s a graphic recap. 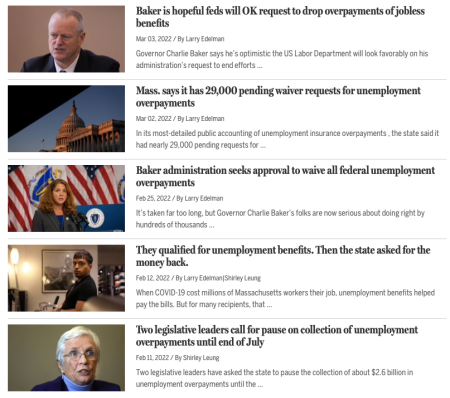 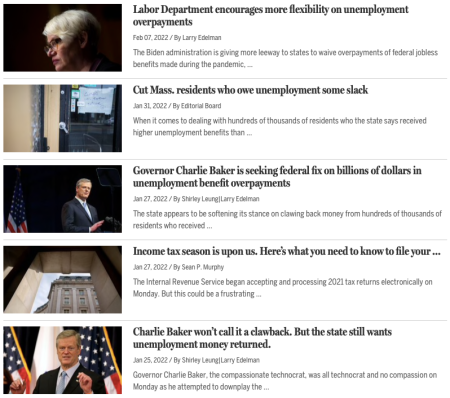 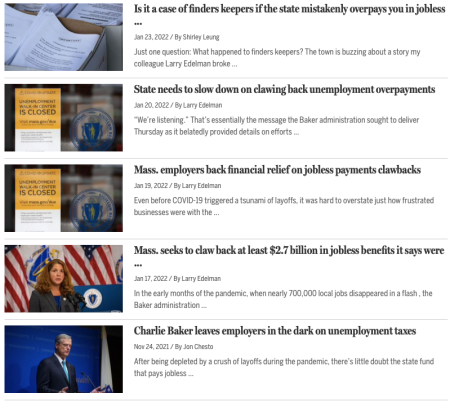 The state last week asked the Labor Department for the OK to issue blanket waivers for Massachusetts workers who collected Pandemic Unemployment Assistance and other federal benefits but were subsequently deemed ineligible or to have received too much money. The blanket waivers would eliminate the need for the state Department of Unemployment Assistance to review each case individually.

According to Edelman, “about 55,400 people with overpayments of state benefits and 7,800 PUA claimants have either fully or partially repaid the DUA, or are on a repayment plan. Recoveries total $183 million on federal benefits and $39 million in state unemployment.”

Here’s an alternative Pay It Backward story, as our kissin’ cousin at Campaign Outsider recently recounted.

I was involved in a similar clawback in the mid-’70s when I worked at the Social Security Administration as a claims representative in the Supplemental Security Income program.

As I chronicled in The Redemption Unit, a memoir of my misadventures in the SSI trenches, when SSA launched the SSI program in 1974, it took aged, disabled and blind people off the state welfare rolls and put them on the federal dole.  Problem was, it pretty much paid everyone top dollar in their category, so after the transfer was complete, every claimant needed to be “redetermined.”

That’s where I – and a cadre of other recent college grads, civil service exams being the last refuge of the liberal arts major – came into the picture. We did the redetermining. And when that was done, the overpayment notices went out.

I’ll let The Redemption Unit take it from here.

When the last claimant’s benefits had been redetermined and the government added up its losses, it immediately decided to recoup them by initiating the Overpayment Recovery Program. Letters went out – on green paper instead of redetermination red – telling claimants they had to come in to the District Office. And the whole kabuki dance started all over again.

“Mrs. Patterson, our records show that you were overpaid during the past two years by a total of $2162.”

In essence the Overpayment Recovery Program took people who’d just had their welfare checks cut, and cut them some more. One day my next-desk neighbor, Tricia McDermott, flipped a file across her desk and leaned back in her chair. Tricia was too compassionate for the job but too strait-laced not to do it by the book. She stared toward the windows and said to no one in particular, “What we need here is an overpayment recovery incentive. Do you think they’d ever consider giving us a cut of the take?”

“No, really – 10% off the top of any money we recover. We could limit it to refunds and exclude adjustments or returned checks.”

That there were three different ways to achieve a single result was pure SSA. Back then the Social Security system was virtually all exceptions and no rules . . . SSI wasn’t quite as bad, but it was still a contraption only Rube Goldberg could love. To make matters worse, the claims reps received a steady stream of what were called “claims transmittals” – memos that were supposed to clarify, but more often complicated, SSI’s crazy-quilt regulations.

Representative sample: “Transmit payment status code of WO4, WO5, or WO9. However, because of systems limitations do not input these PSCs. Use force pay to pay correct amount.” (SSIH, 13515-2)

So nobody read the transmittals. Except me. I figured I needed something on the plus side of the ledger to offset being chronically late and generally out of step. Consequently I read every transmittal, which probably was why I got the computer to do things no one else could.

In the course of my reading I also discovered that two obscure SSI regulations, when combined, essentially allowed a claims rep to waive any overpayment.

So that’s what I did.

A claimant would come in, sit down at my desk and wearily hand over his green letter.

“Yes. Mr. Randolph. Our records show – let’s see here – that during the past two years you were overpaid by $846.”

“That’s right, Mr. Randolph. This is really just a bookkeeping thing. I need you to sign a couple of forms and you’ll be all set.”

I had decided to hand-write the two forms each time; if I had a stack of copies around, they might accuse me of premeditated overpayment waiving. Better to have a sort of eureka element involved. I’d scribble out the forms, turn them toward the claimant, and spend a good five minutes convincing him to sign them. The claimant would walk away looking slightly puzzled. Then someone else would come to my desk with a green letter.

For a while my waive-‘em-all policy stayed under the radar. But I ran into problems when people began asking for me by name. Apparently word had gotten around the claimant community that I was the guy to see with your overpayment letter. So they would come into the DO and – completely disregarding SSI’s sophisticated system of assigning claimants alphabetically – say they wanted to be interviewed by me. Suddenly I was very much on the radar screen.

It got crazy bureaucratic from there. If you’re a glutton for punishment, the climactic conclusion is here.

This entry was posted on Friday, March 4th, 2022 at 12:29 pm and is filed under Uncategorized. You can follow any responses to this entry through the RSS 2.0 feed. You can leave a response, or trackback from your own site.