The undoubtable Alan Dershowitz has penned a five-part polemic for the Boston Globe, promoted this way on Page One of yesterday’s edition: 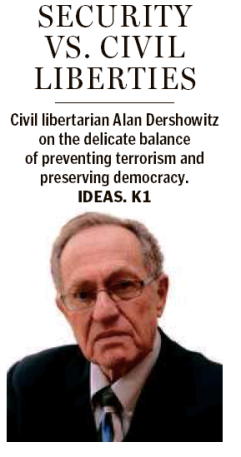 And here’s the first installment in the series, published in yesterday’s Ideas section.

How should a democracy decide when to compromise its ideals in pursuit of victory?

WHEN DEMOCRACIES seek to protect their citizens against new threats posed by terrorist groups such as Al Qaeda, ISIS, Hamas, and Boko Haram, the old rules — designed for conventional warfare among nations — sometimes become anachronistic. New balances must be struck between preserving people’s civil liberties and protecting them against terrorist violence. As Aharon Barak, the former president of the Supreme Court of Israel — a nation that has confronted this issue over many decades — once put it: “Although a democracy must often fight with one hand tied behind its back, it nonetheless has the upper hand.”

Barak was right on two scores: The commitment to the rule of law constrains democracies in fighting terrorists who have no concern for international law; yet although we must fight terrorism with one hand behind our back, that does not mean that we cannot use the other hand forcefully, effectively, and legally.

So why skip the five-part series?

Start with this gonna-drive-us-nuts graf:

None of these issues is amenable to simple answers. They require nuance and calibration — qualities often lost in the emotional debates engendered by the controversial practices employed against terrorists.

That’s a one-part series as far as we’re concerned.