What Can the Globe Undo for Brown? (Fox News Buckraking Edition)

Speeches paying off for Brown

In shift, he releases records; got $126k for Fox News job

MANCHESTER, N.H. — Former Massachusetts senator Scott Brown has earned hundreds of thousands of dollars since leaving office by collecting speech fees, a six-figure paycheck from Fox News, and a variety of other income, according to documents made public Friday. 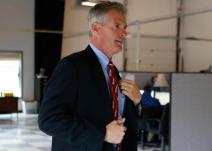 Brown, who lost his 2012 bid for reelection and is now seeking a US Senate seat in New Hampshire, made 20 paid speeches for $186,000 between January 2013 and May 2014. They included a London address to the Royal Bank of Scotland for $20,000 last year, a $900 speech at the Billerica Community Alliance in October, and a $20,000 paycheck for speaking at a hedge fund conference in Las Vegas last month.

As he did in Massachusetts, Brown has sought to present an image of himself as a regular guy with a pickup truck for his New Hampshire Senate bid. New Hampshire’s median household income, among the nation’s highest, is about $65,000.