This editorial cartoon yesterday in Boston’s faulty local tabloid went all in on the latest fever-swamp conspiracy mongering among right-wingnuts . 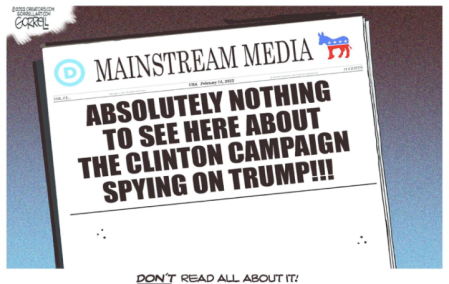 Not to get technical about it, but a) it wasn’t the Clinton campaign behind any monitoring, b) there was no spying on Trump, because c) whatever monitoring did (or did not) happen occurred when Barack Obama occupied the White House.

Some background from CNN’s Brian Stelter.

On Saturday night former President Donald Trump declared that he was the victim of a scandal “far greater” than Watergate. He called for criminal prosecutions and “reparations.” He said “in a stronger period of time in our country, this crime would have been punishable by death.”

Trump’s statement made no sense – except to the Fox audience base that badly wants it to be true.

Four days later, Trump-aligned media outlets are still amplifying his bogus message far and wide and ranting about the circumstances of his 2016 election win over Hillary Clinton. Tuesday’s cover of the New York Post portrayed “HILLARY THE SPY.” The Wall Street Journal editorial page said “Trump really was spied on.” Fox hosts have called it a “bombshell” dozens of times.

One of those Fox News hosts, Jesse Watters, got fact-checked by PolitiFact, which arrived at this conclusion: “Durham’s filing never alleged what Watters falsely claimed: that Clinton paid hackers to spy on Donald Trump before and during his presidency, break into his computers, and then fraudulently frame him for colluding with Russia.”

But, as the Heraldniks might say, never let facts get in the way of a good cartoon.