As the hardreading staff painstakingly chronicled, the Boston Globe dropped Bill Griffith’s Zippy the Pinhead comic strip last August. At the time of the Zipectomy, we had this to say about the management at the stately local broadsheet:

Boston Globe editor Brian (Hey – let’s reimagine the paper! We can use John Henry’s garage!) McGrory has now become a first-ballot entry into the Comic Strip Hall of Shame.

Well, we officially take that back, because Zippy himself is back. McGrory’s media culpa appears on page 2 of today’s Globe.

From our Before ‘n’ After desk, here are Saturday’s comics pages. 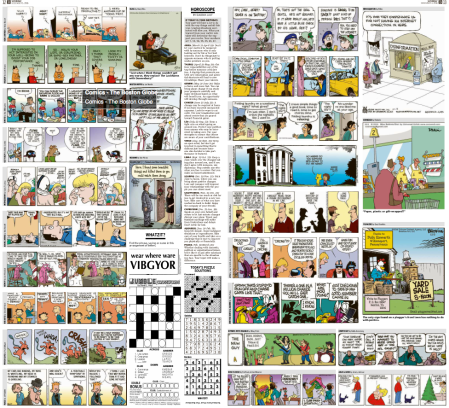 And here are today’s.

And the triumphant return of Zippy.

We’d like to think we had something to do with the Globe’s coming to its senses, but we doubt that’s the case. Still, live and let learn, that’s our slogan.