Some of you splendid readers might be scratching your heads over this full-page ad in today’s Boston Globe. 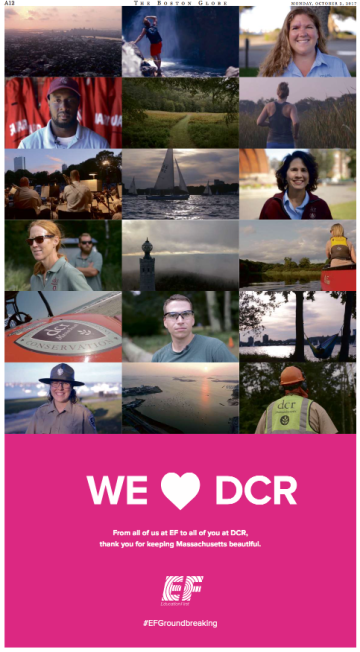 EF is Education First North America, which loves the Massachusetts Department of Conservation and Recreation for millions of very good reasons.

Massachusetts Governor Charlie Baker and many Commonwealth and City of Cambridge leaders today joined EF Education First North America CEO Dr. Edward Hult to break ground on the company’s third new building in Cambridge’s North Point neighborhood, which will result in the creation of 300 new jobs, acres of new public parkland and recreational amenities, and a new permanent operations and maintenance facility for the MA Department of Conservation and Recreation (DCR).

The press release also notes this: “In 2014, the Massachusetts State Legislature unanimously passed special legislation allowing EF to acquire a 125,000-square-foot parcel of land owned by DCR and MassDOT for $20.4 million USD, which previously housed a temporary maintenance facility for DCR. The proceeds from the land sale will fund the construction of a permanent maintenance facility for DCR on one portion of the parcel, which represents an important unmet Big Dig mitigation obligation.”

But wait, there’s more – this item ran in the Business section of today’s Globe, a sort of gift-with-purchase.

Interesting that the press release didn’t mention the $31 million state handout, but, hey, you can’t have everything.

Crosstown at the Boston Herald, however, they pretty much can’t have anything. Education First might love the DCR, but it doesn’t care a fig for the thirsty local tabloid, presumably on the assumption that Herald readers aren’t interested in language classes and overseas education trips.

This entry was posted on Monday, October 2nd, 2017 at 1:07 pm and is filed under Uncategorized. You can follow any responses to this entry through the RSS 2.0 feed. You can leave a response, or trackback from your own site.