Let’s start from the start.

Senator Elizabeth Warren, furious about President-elect Donald J. Trump’s appointments of finance industry insiders, took to Facebook a little over a week ago to fire off a message to her nearly 2.5 million followers.

She took aim at an individual she described as a “hedge fund billionaire” who is “thrilled by Donald Trump’s economic team of Wall Street insiders.”

The hedge fund manager she condemned was Whitney Tilson, who runs Kase Capital. Ms. Warren — the fiery Massachusetts Democrat who is known for her stern mistrust of Wall Street — called him out by saying, “Tilson knows that, despite all the stunts and rhetoric, Donald Trump isn’t going to change the economic system.” Then she added, “The next four years are going to be a bonanza for the Whitney Tilsons of the world.”

Ms. Warren appears to be suffering from the same affliction that Mr. Trump’s critics accuse of him: a knee-jerk, fact-free reaction to something she had read in the news.

In this case, Ms. Warren seems to have come across a Bloomberg News article that includes some quotations from Mr. Tilson. But she didn’t read to the bottom or dismissed it before firing off her zingers.

Turns out “Mr. Tilson’s wife, Susan Blackman Tilson, was one of the students in the first Harvard Law School bankruptcy class that Ms. Warren taught, in fall 1992. The student has remained loyal to her professor; Mrs. Tilson wrote in a letter to Ms. Warren last week that she had been ‘cheering from the sidelines as you rose to national attention for your excellent work on behalf of consumers.'”

On Wednesday, both Boston dailies picked up on the Times scoop.

In Warren, some are seeing shades of Trump’s antics

WASHINGTON — A little over a week ago, a powerful politician read something disagreeable in a news article, logged on to social media, wrote a post blasting a private citizen, and sent it to millions of loyal followers.

The politician wasn’t Donald Trump. It was Elizabeth Warren.

And the private citizen, a wealthy hedge fund manager named Whitney Tilson, is going public with his belief that Warren misunderstood the comments he made to a Bloomberg News reporter that prompted the Facebook denunciation from the liberal Massachusetts senator.

Foolish Facebook tirade hits at . . . one of own donors

U.S. Sen. Elizabeth Warren is coming unglued. Maybe it’s the looming inauguration of President-elect Donald Trump. Or maybe it’s the realization that had she — rather than a 75-year old socialist — challenged Hillary

Clinton in the Democratic presidential primary season, her party could have had a different nominee.

Whatever the reason, the post-election weeks have not been kind to the former Harvard professor. Consider the most recent head-scratcher. On Monday night, The New York Times published a lengthy story about the Massachusetts senator taking to Facebook to blast a “hedge fund billionaire” who she accused of being “thrilled by Donald Trump’s economic team of Wall Street insiders.”

As the Times noted, there are several major problems with this attack. First, the target of her ire, Whitney Tilson, is not a billionaire. Second, he was not a Trump supporter. He’s actually a longtime and extremely generous donor to the Democratic National Committee and such candidates as Barack Obama, Joe Biden, John Kerry, Hillary Clinton and, you guessed it, Elizabeth Warren.

Yesterday, however, only the Globe had Warren’s predictable moonwalk, via this Yvonne Abraham front-page piece.

Elizabeth Warren is still mad as hell at the Wall Street takeover of the next White House. But she’s also a little mad at herself.

That Facebook excoriation of hedge fund manager Whitney Tilson? She shouldn’t have done it, the senator said in an interview Wednesday afternoon. Afterward, she called Tilson to tell him so.

“I think I took it too far,” Warren said.

Yesterday’s Herald, on the other hand, had nothing.

Which brings us to today’s edition of the whiffy local tabloid.

Then again, the Heraldniks have never been all that good at corrections and clarifications, have they?

After four consecutive polls showed Elizabeth Warren leading incumbent Scott Brown in the Massachusetts U.S. Senate race, the Boston Herald finally got some news it could plaster all over Page One (via the Newseum’s Today’s Front Pages): 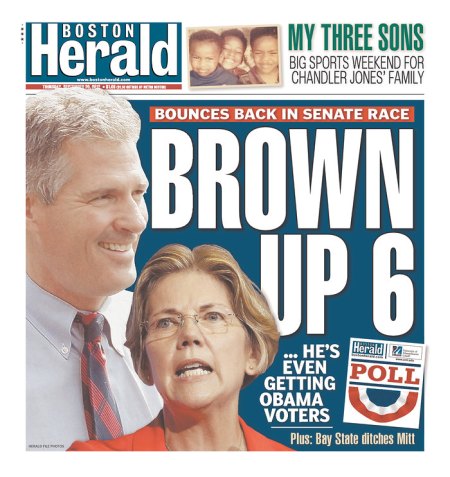 (Extra credit: Compare and contrast, in clear idiomatic English, the photos the Herald chose of the two.)

The Globe, for its part, ran the story Metro p. 3:

A new poll shows US Senator Scott Brown with a lead over Elizabeth Warren, a break from a string of four previous polls that showed Warren leading the race.

In fairness, that’s exactly where the Globe ran this piece two days ago:

Warren ahead of Brown in 3rd poll

Pollster David Paleologos attributed the shift to Warren’s national exposure through her speech at the Democratic ­National Convention, which allowed her to share a platform with President Obama, former president Bill Clinton, and other party luminaries.

(The hardsearching staff couldn’t find yesterday’s piece, about the fourth poll, in either our dead-tree edition or the Globe’s ePaper edition.)

Probably doesn’t matter. It likely all changes after tonight’s debate.