Special election rules in Massachusetts are the Silly Putty of legislation, taking whatever shape best suits the Democratic majority at the time.

Back in 2004, they eliminated a governor’s power to appoint replacements for U.S. Senate vacancies, the better to keep then-Gov. Mitt Romney’s mitts off John Kerry’s seat should he win the presidency. When one of their own returned to the corner office, state lawmakers gave back the power to appoint a temporary replacement.

Now they apparently want to give Gov. Deval Patrick the power to appoint a permanent replacement to serve out an interrupted term, the Boston Herald’s Hillary Chabot reports:

“I think that would be preferable. It would certainly save the taxpayers money if they don’t have to pay for another election,” said Phil Johnston, former chairman of the Massachusetts Democratic Party.

“I think people are campaigned out. I think the governor is very popular and most voters would be happy to support his choice until the next general election,” Johnston added.

Not if the voters are David Bernstein, the intrepid political maven at the Phoenix. Here’s what he tweeted earlier today:

If history is any guide, shame will be the least important factor going forward.

So John Walsh, the chairman of the Massachusetts Democratic Party, really put his foot in it yesterday, yeah?

CHARLOTTE, N.C. – The chairman of the Massachusetts Democratic Party today apologized for saying that Senator Scott Brown tried to portray himself as “an honorary girl” by folding laundry in a TV commercial targeting women voters.

“In the excitement of getting the convention underway and getting the message out about how important it is to re-elect President Obama and elect Elizabeth Warren, I made a statement about Scott Brown that I regret,” party Chairman John Walsh said in a statement this afternoon. “I apologize for that remark.”

Walsh made his initial comment in a blistering opening statement at the first breakfast meeting of the state’s delegation to the Democratic National Convention, which kicks off [today].

Oddly, though, the piece didn’t make it into today’s print edition of the Globe.

The Herald, by contrast, splashed it all over pages two and three. Start with the news report:

CHARLOTTE, N.C. — Clothes-conscious Democratic delegates recoiled yesterday at Massachusetts Chairman John Walsh’s fumbling remark that U.S. Sen. Scott Brown was attempting to become “an honorary girl” when folding laundry in a TV commercial, saying the dig was below the belt.

“Well you know, John, that’s not a good comment. Everyone folds laundry, women and men,” said Faye Morrison, a Democratic delegate from Ayer.

Then to the obligatory Howie Carr sandblasting:

Hey, Walsh: What a load

So any male who folds towels is an “honorary girl,” or so says the corpulent chairman of the Massachusetts Democratic Party, John Walsh.

“I mean,” Walsh said in between bites of a Krispy Kreme doughnut yesterday, “he spent a couple million dollars folding towels on TV to prove he’s an honorary girl. We appreciate that.”

I fold all the kitchen towels in my house, Fatso. Does that make me an honorary girl too? By the way, have you ever watched the president of the United States throw a baseball? Talk about honorary girls …

Well, today’s Herald is, even if the Globe ain’t.

From the copyediting challenged Boston Globe:

Democrats on ramped up Wednesday their efforts to turn the tables on Republican Richard R. Tisei, whose challenge to US Representative John F. Tierney has been boosted by the legal troubles of Tierney’s family.

State party officials announced a two-pronged effort to allege that “Tisei personally benefited by at least $30,000 dollars from the sale of a house that was among the assets his parents were alleged in court to be hiding from parties they damaged.”

The allegations — denied by Tisei, a Wakefield realtor who served in the state Senate — were recently reported in the Boston Phoenix.

The Democratic Party put up a website, http://www.TiseiFacts.com, and state party chairman John Walsh held a conference call with reporters.

Not if you read the Boston Herald, mister.

Front page (via The Newseum): 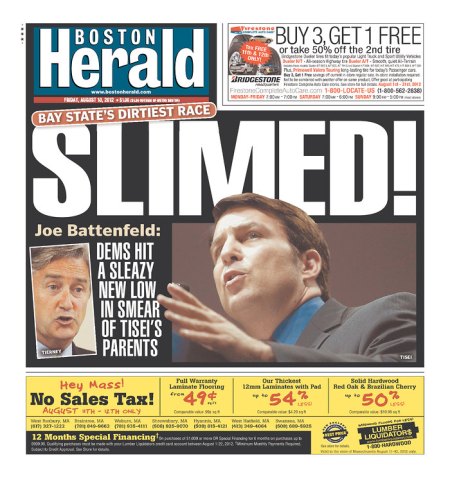 Smearing someone’s family is about as low as it gets in politics, but Massachusetts Democrats are setting a new standard in sliminess.

The party’s new website targeting Republican congressional candidate Richard Tisei claims to show his family’s “web of fraud and deceit,” but all it really shows is how dirty the Democrats are willing to get to win an election.

The joys of living in a two-daily town, yes?

The Boston Herald has sunk its teeth into the EBT Voter Push story and is taking bigger bites every day. Yesterday the feisty local tabloid ran three pieces (to the Globe’s none in its print edition). Today the Herald has upped the ante to four.

The beauty of this story, of course, it that’s its a twofer for the Herald: They get to rough up the welfare layabouts while inflicting maximum collateral damage to Elizabeth Warren, the paper’s particular bête noire.

Today’s edition kicks off with Warren on the defensive:

Elizabeth Warren: Nothing fishy about my kid’s role in EBT campaign

Elizabeth Warren scoffed at U.S. Sen. Scott Brown’s charges that her daughter is leading a taxpayer-funded crusade to get welfare recipients out to vote for her mom, even as records show the Democrat scored thousands in campaign dough from the group’s bigwigs — including a former Boston Globe publisher.

There’s also a backgrounder on Demos, the group organizing the campaign. And what would a pig pile be without the smooth stylings of Howie Carr?

It’s not enough that Granny Warren, the fake Indian, is raising more campaign cash from the Beautiful People and, yes, the machine, than any congressional candidate in the country. Now Brown has to contend with campaign mailings from the Department of Transitional Assistance, i.e., welfare, paid for by money extracted from the taxpayers — his voters.

Oh, yes – just for good measure, the paper tossed in an editorial:

Ah, yes, we can hear the governor once again blaming the Herald for “making sure you’re angry” with yesterday’s front page story on how nearly $300,000 of your tax dollars will be spent to tell welfare recipients how to register to vote.

That the national voter registration effort is led by a left-leaning group whose board is chaired by Amelia Warren Tyagi, daughter of Democratic Senate candidate Elizabeth Warren is, well, just one of those funny political coincidences — no?

Meanwhile, the crosstown rival Globe ran its story – an expanded version of what the paper posted yesterday afternoon on its website – front page above the fold. The broadshet also ran this chinstroker about  the Massachusetts Democratic Party’s “aggressive effort to expand upon and invigorate the grassroots organization that propelled Deval Patrick to two terms as governor after 16 consecutive years of GOP control over the Corner Office.”

We’ll see tomorrow who makes an aggressive effort to expand upon and invigorate the voter registration story. We’re laying plenty of eight-to-five it’s the Herald.