The fiscally local tabloid had this one all to its own self yesterday. 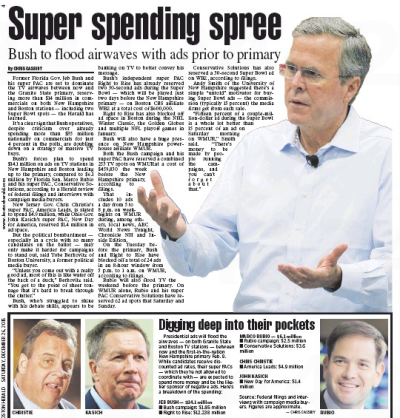 Is he nuts? graf: 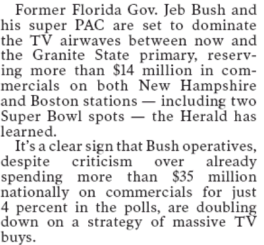 Crosstown, the Boston Globe front-paged Matt Viser’s piece about the pollution of polls in the political process. And down in the Big Town, the New York Times examined whether Jeb Bush is funny. Here’s guessing WMUR and etc. think he’s hilarious.

Anyway, score one for the Herald.

Globe and Herald Actually Agree on Something!

It’s not often that the stately local broadsheet and the feisty local tabloid find themselves in accord, but today is one such instance.

The Boston dailies have pretty much the same take on last night’s Voters First Forum at St. Anselm College in New Hampshire.

[W]ith 14 candidates fighting for time during a two-hour debate, it became at times a rollicking, political version of speed dating, with each candidate trying to cram as many words as possible into their allotted time.

For GOP voters facing a crowd of eager presidential suitors, last night’s Voters First forum in New Hampshire was exactly what they need. A political combination of speed dating and Tinder.

Give the edge to Atkins for tossing in Tinder. But nice to see the crosstown rivals think alike on something, eh?

The hardreading staff knows we should just ignore this knucklehead, but the Boston Herald’s baldiest thumbsucker scales entirely new heights of Carrtoonishness in today’s column.

There is only one way to settle once and for all the question of whether the fake Indian is or is not a real Indian.

She needs to take a DNA test.

I dare you, Sen. Warren. It only costs about $200. If you insist, I’ll pay for it. In fact, I’ll take one myself. It’s easy. Just swab the inside of your mouth. Check my photo on the left, I’ll show you how to do it.

Seen enough? Us too.

First there were truthers. Then there were birthers. Now we have . . . lizzards – sorry, Lizzers.

In book, Warren explains guarded nature with the media 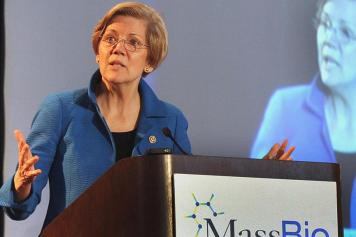 WASHINGTON — It is an odd contradiction. Senator Elizabeth Warren has shaped an image of herself as woman of the people, fighting for common middle-class families, unimpressed by her own power.

But since her 2012 election the Massachusetts Democrat has typically walled herself off from the media, refusing to answer questions in Senate hallways, frequently declining interviews, and adopting some of the same guarded, cautious communication strategies as the corporate CEOs she often pillories. Several weeks ago, a Warren aide physically blocked and reprimanded a Globe reporter seeking to ask Warren a question about the Boston Marathon bombings.

Globe Retweets From Its Patrick-Third-Term Gaffe

So Gov. Deval Patrick made a joke yesterday about running for a third term and wouldn’t you know some people took him seriously and faster than you can say tweet tweet it was out there on the social media wire.

For a few minutes early Wednesday afternoon, the Massa chusetts political world was in flames.

Governor Deval Patrick’s attempt at humor during an appear ance at the University of Massachusetts Boston went viral, leading many to believe that he would seek a third term. That would have been news, indeed, since Patrick has long professed to be satisfied with two terms.

And, while there is no law prohibiting a third consecutive term, there is no modern precedent.

That ignited a firestorm of retweets, online exclamations of disbelief, and panicked phone calls by news organizations looking to catch up on a story that would dramatically remake the state’s political landscape.

It turned out to be a false alarm, but what the Globe piece fails to mention is that one of its own was among the retweeters. It was left to our feisty local tabloid to reveal the full story.

NECN tweets from the hip

A red-faced NECN chalked its social media gaffe up to “human error” yesterday after firing off a mistaken tweet declaring Gov. Deval Patrick was running for a third term — a blunder experts say newspeople can avoid by thinking before they tweet.

The cyber slip spread like wildfire to Washington, D.C., where it was retweeted by a Boston Globe reporter, and the governor’s press office was forced to field a barrage of calls. Social media experts say the blame lies with shoddy journalism.

“Twitter’s not dangerous — the people who use it can be,” said Al Tompkins of the journalism think tank the Poynter Institute. 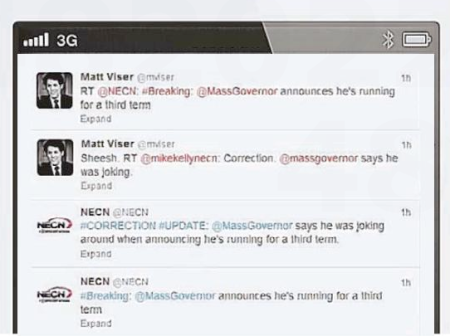 A spokeswoman for our stately local broadsheet told the Herald’s Jessica Heslam that reporter Matt Viser followed the newspaper’s social media policy. “He retweeted a trusted source, NECN,” she said,”and the second NECN said it made a mistake, Matt retweeted that. All of this took place within a minute.”

Hey – maybe that’s why the Globe didn’t report it today. It happened too fast.