Our feisty local tabloid has been keeping close tabs on ‘Round Town Scotty Brown (R-Indian Given).

Here’s the tally just from today (call it  his Turkey (Day) Trot), starting with a political piece:

U.S. Sen. Scott Brown drew a clear line in the sand yesterday in support of Israel, an indication of fierce congressional backing for America’s key Middle East ally no matter what the outcome of its tenuous Egypt-brokered cease-fire with the militant Hamas group.

“They have a right to defend themselves, and Hamas needs to stop,” said Brown, who serves on Senate committees on armed services and homeland security. “If we’re going to have any kind of lasting peace, then there needs to be a change of policy with a lot of the groups over there. They cannot think that Israel is going to be wiped off the face of the Earth. Iran needs to step back from that position and so does the rest of the region.”

When he made those comments Brown was at the Pine Street Inn (thus the apron), an appearance that got him into a human interest story, this one headlined “Pine Street misses ailing mayor.”

“We brought our time, we brought a check, and I encourage others to do that,” Brown said. “I’m very thankful for my wife and kids, and I’m thankful I can be here again this year.”

Just to whet your appetite, a screen grab: 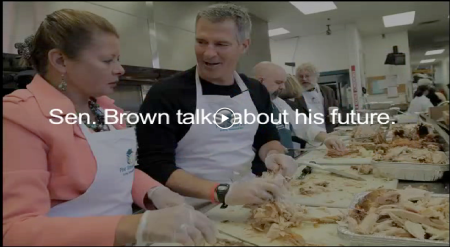