What Can the Herald Do for Brown?

Keep it sunny-side up, for starters, unlike the prunefaces at the stately local broadsheet.

Brown is protested in N.H. 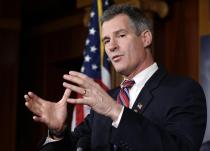 Inside the private fund-raiser, Brown, who is a potential challenger of US Senator Jeanne Shaheen, was said to have been greeted warmly and to have posed for photographs with supporters, while remaining coy about his plans.

Across the street, two protests merged, as gun-rights advocates, raffling off a firearm, stood shoulder to shoulder with Democrats to encourage the former Massachusetts senator to return south, or, at least, not to run for office here.

Most of the protesters, the Globe piece notes, were there for “[a]rally of the New Hampshire Firearms Coalition, which bills itself as the state’s ‘only no-compromise gun rights organization.’ The organization opposes Brown, a Republican who said in December 2012 that he supported a federal ban on assault weapons.”

The rest were Democrats who just oppose Brown, period.

The Senator from Elsewhere got a much friendlier reception in the Boston Herald.

Brown: ‘Not toying’ with voters

“I’m not toying with them,” Brown told reporters last night. “There are three good candidates running right now. So it’s not a question of there’s no one running. I have to  establish residency, which I’ll be doing this week, and spend time over the holidays with my family. I know you’re eager and others from the other side are eager … for me to make a decision, but there’s no  pressure.”

Not until he went outside, anyway.

But the the Herald report downplayed the protest, relegating it to a photo caption.

The flirty local tabloid, on the other hand, is that into him.