The Boston Herald is so far in the tank for Donald Trump these days, its editors should be wearing scuba gear.

Exhibit Umpteen: Today’s edition of the flunky local tabloid, starting with Page One. 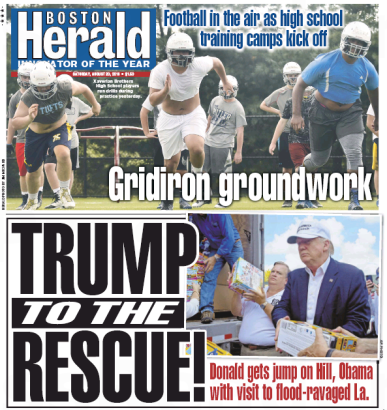 To be fair, there’s nothing really wrong with the report headlined “Trump visits LA’s beleaguered bayou.” But right alongside it is a piece by Trumpkin Adriana Cohen that’s just knee-buckling in its simple-minded sycophancy.

Who needs Hill, Obama? The Donald to the rescue

The catastrophic flooding in Louisiana is now being called the worst natural disaster in the U.S. since Superstorm Sandy.

Yet with callous indifference to those suffering, Hillary Clinton and President Obama are missing in action. Clinton has come up with lame excuses why she’s a no-show. And Obama is working on his golf swing with millionaires, billionaires and celebrities on Martha’s Vineyard.

Donald Trump showed the country who’s boss yesterday by flying to Louisiana to comfort those affected by the catastrophic flooding.

Cohen proceeds to gush over Trump’s “mission of mercy,” proclaiming that “Trump showed voters that in a time of disaster and calamity, he’s not an Ivory Tower guy. He shows up and rolls up his sleeves.”

Right. For about 49 seconds.

From the occasionally readable Tommy Christopher at Mediaite:

On Friday morning, freshly-minted Donald Trump campaign manager Kellyanne Conway told ABC News that Trump and running mate Mike Pence would be traveling to Baton Rouge, Louisiana to “help people on the ground” in a “decidedly nonpolitical event” with “no press allowed.”

As it turns out, though, there actually were members of the press allowed, and the candidate did use the occasion to attack his political opponent, and there were opportunities for photographs, but true to his word, Trump did “help out.” Pool cameras trailed Trump for his entire visit, and over the course of those several hours, Trump “helped out” by unloading a truckload of toys for 49 seconds.

The flood victims of Louisiana should absolutely get all the help America can give them. But from the evidence in the chumpy local tabloid, the Heraldniks should get themselves some help as well.

The Boston Herald’s normally ignorable columnist Adriana (Trumpless GOP Can Kiss Me Goodbye) Cohen, who is almost as big a Trump Chump as her work husband Howie Carr, caused quite a rumpus on CNN yesterday when she went Chernobyl on Ted Cruziac Amanda Carpenter over his alleged extramarital affairs – including with Carpenter.

A leading member of the Trump fan club derailed a CNN segment Friday afternoon by accusing former Ted Cruz spokeswoman Amanda Carpenter of having an affair with the Texan senator. Asked by CNN anchor Kate Bolduan whether she thinks Trump is “ready to move on” from sexualized attacks on Cruz’s wife, Boston Herald columnist Adriana Cohen responded: “Oh, absolutely I think we should move on. Where we should move to is The National Enquirer story that was reported that Ted Cruz has had affairs with five mistresses, including you’ve been named as well, Amanda.” An incensed Bolduan shot back: “I don’t think that’s ‘moving on’ at all.” Unfazed, Cohen repeated the allegation, and then pointedly asked Carpenter: “Will you denounce this story or will you confirm it?” Carpenter called the allegations “smut” and said they were “categorically false.”

First of all, Trumpkin?

Second of all, let’s go to the videotape.

But we have high hopes for tomorrow.