A smashmouth piece in the Huffington Post this week about U.S. Attorney Carmen Ortiz and her pattern of political prosecutions has drawn attention in both local dailies, but, as usual, from different angles.

Just ask US Attorney Carmen Ortiz. She made a big splash when she indicted two aides to Boston Mayor Marty Walsh on charges they forced organizers of a music festival to hire union workers. But now, with Walsh presumed to be her ultimate prize, a posse of critics is throwing cold water on the prosecution.

Vennochi proceeded to cite criticism of Ortiz by former AG Martha Coakley, attorney Harvey Silverglate, and retired federal judge Nancy Gertner – all of whom were quoted in the HuffPost takedown.

Crosstown at the Boston Herald, though, the focus was more on the question of Marty Walsh’s possible involvement in the Ortiz hit, given that she has already indicted two Walsh administration officials on charges of extortion.

Today there’s no follow-up in the Globe, but the Herald has this piece by Dan Atkinson.

A national conservative group wants to see any communications between City Hall and the authors of a Huffington Post piece blasting U.S. Attorney Carmen M. Ortiz, saying that if Mayor Martin J. Walsh or his staff engaged in a political hit job, they should be “held up to public scrutiny.” 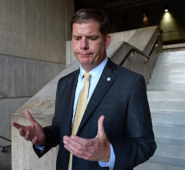 A Herald front-page story yesterday quoted Walsh saying he and his aides had no involvement in the article, titled “This Federal Prosecutor Is Building A Career Indicting The Good Guys.” But the mayor admitted that he and his chief of staff, Daniel A. Koh — who used to work at The Huffington Post — knew the piece was in the works.

“Both the timeline and the mayor’s answer raised red flags for us,” said Amelia Chasse, a spokeswoman for America Rising PAC, which filed a public records request with the city for any emails and texts between the Walsh administration and The Huffington Post.

As most of you know, it’s a rare thing indeed to see a correction in the feisty local tabloid. Think of it as a sort of Halley’s Comment when one does turn up, as actually happened in today’s edition.

From the Herald’s op-ed page:

Looks like a pretty harmless mistake, right? So why the correction in this case? Hell, the Heraldniks unapologetically manufacture news out of whole cloth all the time, like yesterday’s ludicrous front page: 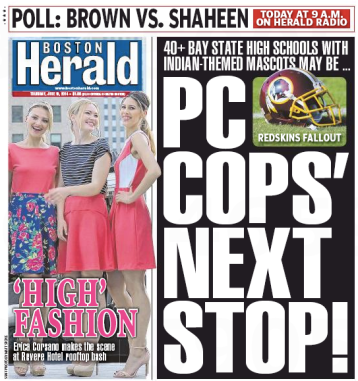 As old friend Dan Kennedy noted at Media Nation, “the Washington Redskins trademark ruling will have little effect.” But that had no effect on the Herald.

So back to the question: Why the correction to the Astrue column, which carried the headline “Connector mes$ demands probe.” Perhaps because of this:

[U.S. Attorney Carmen Ortiz] should look at the grant HHS awarded to Massachusetts to “help” other New England states build their exchanges. As silly as it looks now, HHS believed that Massachusetts would excel among the states because it built the first exchange during the Romney administration. Ironically, Connecticut is now providing Massachusetts with indispensable software and technical assistance. Ortiz needs to find out how [Massachusetts Health Connector Executive Director Jean] Yang spent the HHS grant and whether she illegally redirected funds to pay for the state’s staggering cost overruns.