Boston (Globe), We Have a Houston Problem

Brown: ‘I’ve had some crazy situations’ 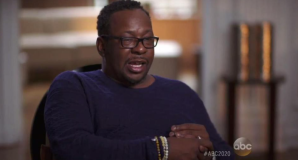 Bobby Brown will say what he wants, weird as it may be. That’s his prerogative.

In an interview to promote his new memoir, “Every Little Step,” the Roxbury native and cofounder of the ’80s boy band New Edition told Robin Roberts on “20/20” Tuesday that he had sex with a ghost.

Uh-huh. Then there’s some other stuff in the item that’s entirely unremarkable, as Brown himself tends to be.

But it was a whole nother story from the Boston Herald’s Inside Track Gal, Gayle Fee.

Bobby Brown, the Roxbury R&B star who was married to the late Whitney Houston for 14 years, reveals that the mega-pop star had a lesbian love affair with her best

friend and longtime assistant Robyn Crawford, adding that if the two were still together, Houston might never have died.

“I really feel that if Robyn was accepted into Whitney’s life, Whitney would still be alive today,” Brown told Us Weekly. “She didn’t have close friends with her anymore.”

With grave robbers like Bobby Brown around, though, she’ll never really be gone.

The Taylor Swift/Conor Kennedy bustup is of course the Main Dish in both local dailies, but as usual, the ingredients vary.

The Globe’s Namesniks are pretty tentative about the whole thing:

On the same day Taylor Swift released a video for “Begin Again,” a song about starting over after a bad breakup, word comes that the country singer’s romance with Conor Kennedy is kaput.

Citing an unnamed source close to Swift, Us Weekly reported that the 22-year-old “You Belong to Me” singer and the 18-year-old grandson of Robert F. Kennedy have split.

“They quietly parted ways a while ago,” the friend told the magazine. “It was just a distance thing. No hard feelings. They’re fine.”

That sounds like a Kennedy-industrial complex party line, eh?

No such pussyfooting around from the Track Gals (and Megan!) in the Herald:

Like so many summer romances that burn hot in July and August, Taylor Swift’s fling with Conor Kennedy cooled once the leaves turned and the Hyannisport sun faded.

It was epic while it lasted — all two months’ worth. They frolicked at the compound, where, according to Ethel Kennedy, Tay Tay, 22, was just like one of the family. In fact, Swift and the Kennedy dowager seemed to have a lot hotter romance than the singer and Ethel’s 18-year-old grandson. (“I love her,” Taylor said. “She’s sensational inside and out,” Ethel said.) . . .

Word is, Conor cooled on the relationship because Tay Tay came on waaaay too strong for the frightened Deerfield Academy junior.

“It kind of freaked him out,” a source told Radar Online.

There – that’s the kind of dish we like served up.  Fresh and steamy.