The Essential Difference Between the Boston Dailies

From our One Towne, Two Different Worlds desk

As the hardreading staff has (we trust) dutifully noted, the local dailies rarely see eye-to-eye on any particular story.

Yesterday was no exception.

But it was particularly illuminating. And it all revolved around fan safety at Fenway Park, where most fans go to 1) see a Red Sox victory, and 2) avoid any major head injuries. 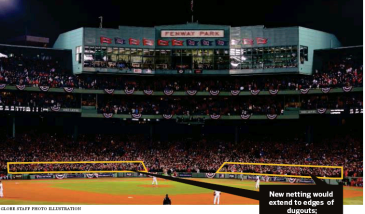 NASHVILLE — Major League Baseball on Wednesday took steps to protect those fans who want to sit close to the action, recommending that all teams extend protective netting between the dugouts for any field-level seats within 70 feet of home plate.

The Red Sox immediately announced they would comply and are making plans to extend the netting behind home plate to the dugouts. Team president Sam Kennedy said the Sox are evaluating what the size and type of the netting will be.

To illustrate one example, the stately local broadsheet mentioned this in paragraph 11:

On July 10, a woman sitting [near the edge of the backstop screen] was hit in the forehead by a foul ball. Stephanie Wapenski, 36, of Branford, Conn., required more than 40 stitches.

Crosstown at the Boston Herald, Stephanie Wapenski was no footnote – she was the hitchy local tabloid’s Cover Girl.

From the estimable Peter Gelzinis:

Even if the Red Sox didn’t plan to extend the protective netting along the first- and third-base lines, Stephanie Wapenski had no intention of staying away from the ballpark she loves. And now, in a fairy-tale ending to her hard luck story, she’s going back for love.

Wapenski was six rows up from the third-base line, watching the Sox play the Yankees last July. She recalled telling her fiance, Matt Fraenza, “We’re going to catch a ball tonight.”

What this Connecticut woman wound up catching on that night was a 100 mph line-drive foul from Yankees shortstop Didi Gregorius that ricocheted off her forehead and landed in short left field.

“When the Red Sox asked what they could do for us,” Stephanie recalled, “we mentioned that we weren’t interested in pursuing any legal action. We told them we were rabid baseball fans who would love to be married at Fenway.”

The Red Sox didn’t need to be asked twice. They waived the $10,000 fee other couples, who have not been beaned by a line drive, must pay to be married on the field.

And an excellent example of the gap between the rational local broadsheet and the emotional local tabloid.

Or at least what’s left of them.