Friday’s Boston Globe featured this piece on Metro Page One:

Fenway Park bills itself as a fan-friendly venue, and next season promises to be a little friendlier for customers who enjoy a beer or a little hard alcohol with their peanuts and Cracker Jacks. 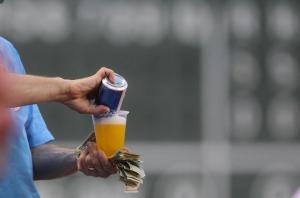 With many games lasting more than three hours, a leisurely pace that suits the Red Sox more than most Major League teams, the elimination of a time limit could result in an increase in alcohol sales.

And an increase in beer bottles, in order to “curb the long lines that often form at concession stands, where each beer is poured into a cup.”

Next season, customers can opt for a bottle instead of a draft beer and walk away with an opened container.

Licensing Board chairwoman Nicole Murati Ferrer said the panel did not consider bottles to be a safety issue.

“With this particular ballpark and the fans that we’ve had, there’s no history of projectiles being used” outside long past, isolated incidents, Murati Ferrer said.

Right. Until the Beerded – sorry, Bearded – Ones start losing games.

But what’s really lost in this report is any disclosure that Fenway Park owner John Henry also owns the Boston Globe.

Memo to the stately local broadsheet: Good news is not no news.

This entry was posted on Saturday, December 14th, 2013 at 1:12 pm and is filed under Uncategorized. You can follow any responses to this entry through the RSS 2.0 feed. You can leave a response, or trackback from your own site.

One Response to More Beer at Fenway Park! Less Disclosure at Boston Globe!

Leave a Reply to Once Again, Boston Globe Less Than Fenway Frank | It's Good to Live in a Two-Daily Town Cancel reply