Contract negotiations between Boston GlobeSox owners John/Linda Henry and the Boston Newspaper Guild (the employee union for The Boston Globe) have been limping along for two-plus years, thanks in no small part to the hardball tactics employed by law firm Jones Day, which is to unions what bowling balls are to tenpins.

As a result, three local unions – the Greater Boston Labor Council, the Greater Boston Building Trade Unions, and the Communication Workers of America – joined forces to run this full-page ad in yesterday’s edition of the $tately local broadsheet. 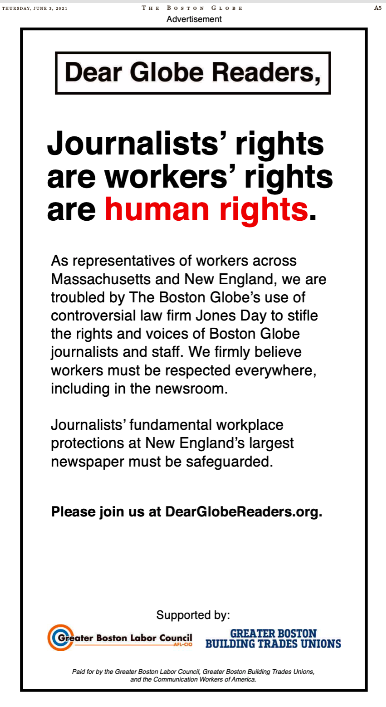 Those who venture to DearGlobeReaders.org find this right off the top.

The website also features press releases about the paper’s proposed outsourcing and elimination of “just cause” protections against arbitrary firings or suspensions. In addition, there’s this accusation: “Behind closed doors, subscriber money is being squandered on attacks against the journalists who bring you the news each day, as many of us put our own safety on the line to do so.”

Those personal stories are reflected in the Boston Newspaper Guild’s Twitter feed as well. 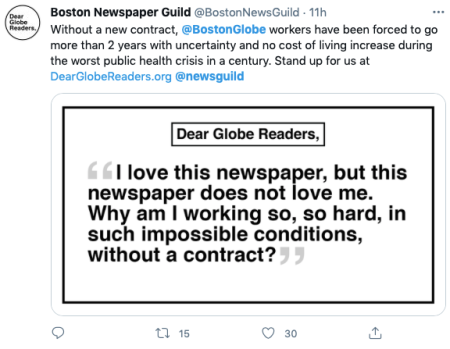 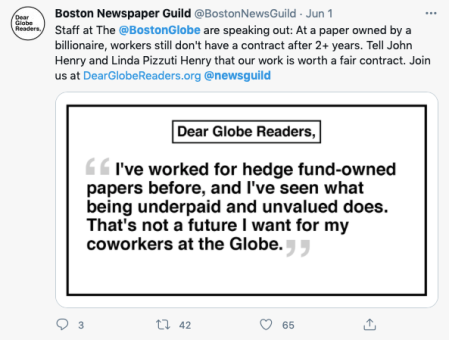 Sorry to be the skunk at the garden party for the umpteenth time, but if past is prologue, this protest is destined to go pretty much nowhere. None of the NewsGuild’s previous efforts to generate public pressure on the Globe seem to have moved the needle at all.

We’re a long way from the days when average Americans got exercised over the corporate looting of local newspapers the way the good citizens of Atlanta did in the 1980s, which was chronicled in the documentary Fear and Favor in the Newsroom.

When muckraking Atlanta Journal-Constitution editor Bill Kovach resigned in 1988 over “irreconcilable differences” with the management of the Cox media chain, several hundred readers and employees of the AJC draped themselves in black and marched to the paper’s headquarters, where they deposited a newsprint-stuffed coffin labeled “Here lies the truth.” 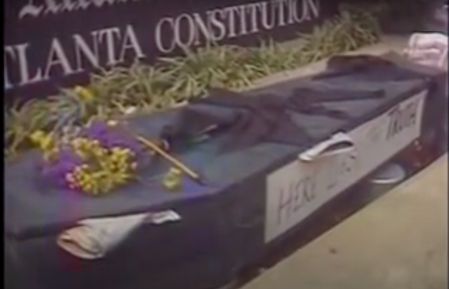 But here lies the new truth: That is something you will likely never see in Boston. Or much of anywhere else in the U.S. for that matter. It really is a shame.

Why Does Jim Fregosi Get a Boston Globe Obit Before Doug Mohns?

From our Free the Doug Mohns One! desk

Saturday’s Boston Globe featured this obituary (via the Atlanta Journal-Constitution). 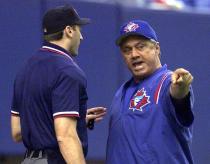 After an 18-year playing career that included six All-Star seasons with the Angels, Mr. Fregosi managed parts of 15 seasons in the majors and had a 1,028-1,094 record with the Angels, White Sox, Phillies, and Blue Jays. He guided the Phillies to a 97-65 record and 1993 World Series berth after rallying from a 2-1 deficit to beat the Braves in three straight in the National League Championship Series.

He received multiple college football scholarship offers but opted to sign with the Red Sox for a $20,000 bonus.

Period. Never played for the Sox (although he did affect the 1967 Impossible Dream team in an indirect yet significant way according to ESPN’s Gordon Edes.)

Regardless, how does Fregosi deserve an obit before Boston Bruins stalwart Doug Mohns, whose passing has been resolutely ignored by the Globe (as the hard reading staff has previously noted).

Give Doug Mohns a proper sendoff.

Doug Mohns last pulled on a Black and Gold jersey in 1964. Half a century later, fans recalled the former Bruin with fondness upon his death Feb. 7. Mohns appeared in 1,390 career games for Boston, Chicago, Minnesota, Atlanta, and Washington. Mohns, who played both up front and on defense, scored 248 goals and 462 assists. In Boston, Mohns had his best season in 1959-60, scoring 20 goals and 25 assists for coach Milt Schmidt. In Chicago, Mohns played on a line with Stan Mikita. Mohns might be best remembered as being an early adopter of the slap shot.

Nice, but still not a proper obit.