Man, the flirty local tabloid has some crush on Maria, eh?

As the hardreading staff noted, the Boston Herald gave anchor Maria Stephanos’ departure from Fox 25 full-page play in Friday’s edition, versus a paltry Names item in the Boston Globe.

[A]s I watched Maria Stephanos’ farewell last night on Fox 25, I couldn’t help but feel that as she was leaving that building, “different” was leaving the Boston TV news market, at least for now.

After all, Maria epitomized everything that Fox was — loud, smart, sassy, engaging … not afraid to mix it up, not afraid to laugh at herself and not afraid to give a hug. Or a “VB!!!!!” in that high pitch only Maria can hit when she is outraged!

Combine Maria’s exit with that of Fox 25 investigative reporter Mike Beaudet, and “different” is now taking a dirt nap.

Today we’re back to one page.

(WARNING: As with a solar eclipse, we advise you not to look directly at the photo of Stephanos and Howie Carr.) 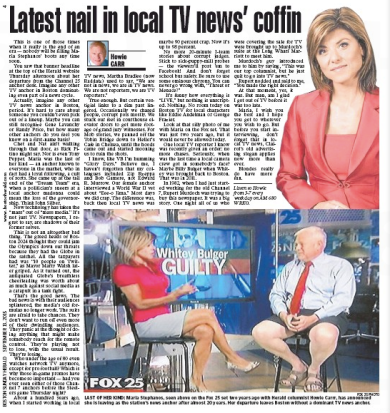 Meanwhile, crosstown at the Globe, the only mention of Stephanos’ exit or the local TV news scene beyond the aforementioned Names item is this mention in Joshua Miller’s Political Happy Hour on Friday.

STEPHANOS LEAVING FOX 25, via Jessica Heslam on BostonHerald.com: “FOX 25 anchor Maria Stephanos — a fan favorite who has been at the Boston TV station for nearly two decades — is leaving the station to ‘pursue new professional endeavors,’ the station just announced. Her last day is tomorrow. ‘I have decided it’s time for me to embark on a new adventure,’ Stephanos said in a statement announcing her surprise departure. …” http://bit.ly/1ODowij

How sad is that – the Globe once again a lively index to the Herald, instead of the other way around.

Chalk one up for the feisty local tabloid.

When Fox 25 anchor Maria Stephanos announced yesterday she was leaving the station after almost 20 years, she kept the details pretty skimpy (via TVSpy).

“I have decided it’s time for me to embark on a new adventure,” said Stephanos. “I will miss working with this extraordinary team, but I know FOX25 is in good hands and will continue to grow. I am beyond blessed, to deliver the news in the place where I grew up. New England viewers are savvy and smart and I love them for that. Thank you for making me part of your family.”

And today’s Boston Globe Names column kept it that way. 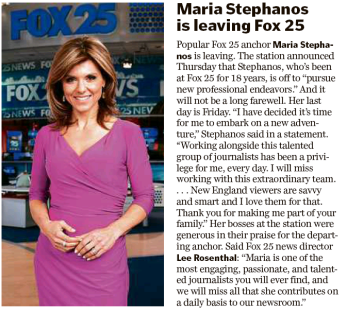 Crosstown at the Boston Herald, though, Jessica Heslam had a lot more to offer.

Stephanos was tight-lipped on her stunning exit from Fox 25 yesterday but her husband, Dale Stephanos, alluded to bad blood between his popular anchor wife and station owner Cox Media Group when he wrote on his Facebook page:

“It’s so rare to find people with real integrity these days. Harder still to find people like that in the media. I’m so proud and happy for my wife today. This took a lot of guts.”

Drove her out graf:

The new owners want shorter stories and more of them. They also want to boost the number of stories in communities with the highest number of meters that track TV ratings, sources said.

Okay. Now it’s making some sense. Although we’re sure there’s more to come. Check both dailies for details.