The Boston Herald devotes two pages today to remembrances of the great Elmore Leonard, who died yesterday at age 87.

Start with the Associated Press obituary, which begins “He was the master of his genre, the Dickens of Detroit, the Chaucer of Crime. Every novel Elmore Leonard wrote from the mid-1980s on was a best-seller . . . ”

The obit includes Leonard’s legendary writing tip: “Try to leave out the parts that people [tend to] skip.”

In addition to that, the Herald has appreciations by James Verniere and Bill Burke. 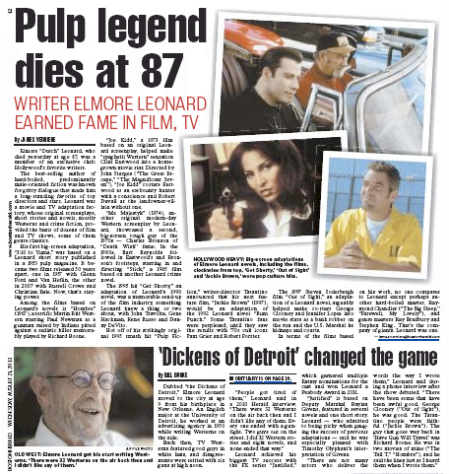 In terms of the films based on his work, no one compares to Leonard except perhaps another hard-boiled master, Raymond Chandler (“The Big Sleep,” “Farewell, My Lovely”), and genre masters Ray Bradbury and Stephen King. That’s the company of giants. Leonard was one.

Crosstown at the Boston Globe there’s an obit picked up from the Washington Post, and an item in Names.

But the feisty local tabloid takes this round.