From our Boston GlobeSox desk

Wow, the Boston Globe has a story about a Red Sox commercial partner — a casino, no less — entering into a deal to put an ad on the left field wall (I refuse to call the edifice by its brand name.) And it comes with a picture of the new logo. Imagine that. How ever did the team owners convince the region’s dominant media outlet to run a piece on what is essentially a marketing deal that enriches the owners but means nothing to fans. Boy, that’s some pull, huh? ( The Globe, by the way, most recently ran an editorial opposing expanding casino gambling, a move that would hamper the Sox newest partner.  Hmm, wonder if [the] hard reading staff at “It’s Good to Live in a Two-Daily Town” took notice.) 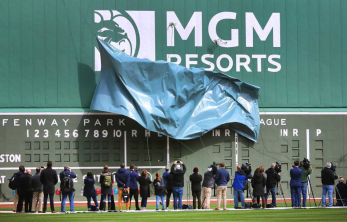 The Green Monster has a new logo, just in time for the Red Sox home opener.

A large advertisement featuring MGM Resorts’ roaring lion trademark was unveiled at Fenway Park Friday, courtesy of a new partnership between the team and the casino giant.

“This is hallowed ground,” said Jim Murren, chief executive officer of MGM Resorts International. “The fact that Fenway Sports is willing to work with us is humbling.”

The story also flacks “an array of new concession snacks, renovations to the press box and player clubhouses, and augmented-reality capabilities for the MLB Ballpark app, which will allow fans to roam the stadium with their phones, scan certain objects, and see them come to life.”

1) Nowhere in that piece – or in the print version – is it disclosed that the Boston Globe is owned by Red Sox owner John Henry.

2) The piece was written by a Globe correspondent – not a staffer – who is presumably blameless in this matter and so will go unnamed.

But the correspondent’s editors – they’ve got some ‘splaining to do, no?