Anatomy of a Local News Cycle

On Thursday, this Meghan E. Irons piece appeared on BostonGlobe.com.

In year-end note, Jackson makes his case to Boston

City Councilor Tito Jackson, who is considering a run for mayor, has posted a polished, well-laid-out case for himself on social media, articulating his 2016 accomplishments.

The message, complete with glossy pictures of the councilor talking to students, rallying crowds, and holding a bullhorn at City Hall, was not specifically addressed to residents in District 7, which he has represented since 2011. Instead it was directed at the entire city.

With possibly an even more eventful one to come, if Jackson takes on Boston mayor Marty Walsh. 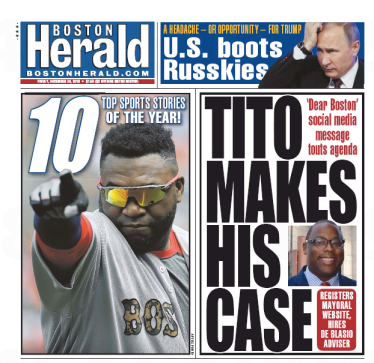 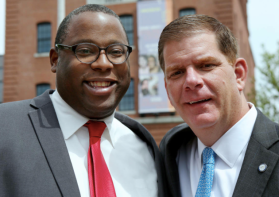 Operatives working for City Councilor Tito Jackson have registered the website titojacksonformayor.com and have drafted the campaign manager for New York City Mayor Bill de Blasio, further proof the Roxbury pol is gearing up to take on Mayor Martin J. Walsh next year.

Jackson also just posted a flashy “Dear Boston” online message to supporters citywide — pushed out on Facebook, Twitter and Instagram — outlining what could be his platform for running for mayor . . .

Jackson, the District 7 councilor, has said he’s considering a challenge to Walsh and has increased his campaign fundraising and spending over the past several months.

Hyers is officially “moonlighting” for Jackson, since Hilltop’s New England office is “firmly in Walsh’s camp for the upcoming election,” according to the Herald.

Bring a food taster to their next office party, eh?

(Other Tito takes in Friday’s pushy local tabloid: A sidebar headlined From the ‘Dear Boston’ letter, and Hillary Chabot’s column Trump could give councilor a boost.)

Once again the Herald was on Tito like Brown on Williamson, devoting all of page 5 to teeing Tito up (Inexplicable Little Green Numbers sold separately). 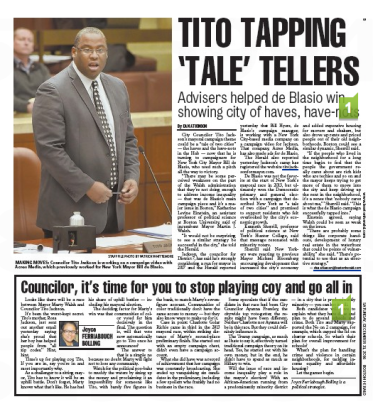 Crosstown at Saturday’s Globe: Still no.

The fading local tabloid featured only this 2017 prediction in a column by Boston Herald Radio yakker John Sapochetti.

Crosstown at Sunday’s Globe: Even more no.

See ya next cycle.