The hardreading staff has a track record of being, well, hard on the selfie local tabloid. But we also believe in giving credit where credit’s due.

So, from Sunday’s Boston Herald, which is read by up to several people. 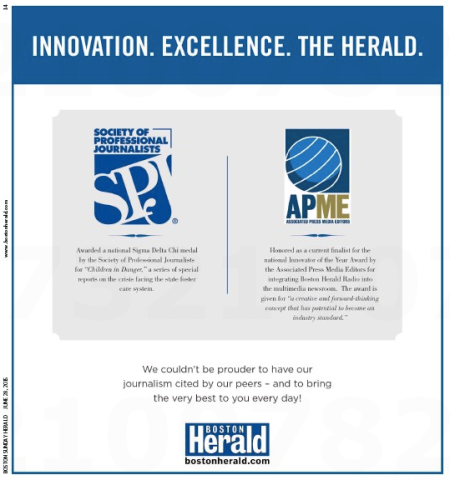 The Associated Press Media Editors announced its awards earlier this month. Oddly, the only category without a winner was the aforementioned Innovator of the Year.

Maybe it’s still TBA. If so, we’re sure the finalist local tabloid will let u know.

The SPJ Sigma Delta Chi medal, on the other hand, was already trumpeted by the Herald two months ago.

Not to get technical about it.

Regardless, sincere kudos to the Heraldniks.

Well, the Society of Professional Journalists has announced its annual Sigma Delta Chi awards, and the Boston Herald exercised great restraint by waiting until page 2 to announce its good fortune.

For those of you keeping score at home, that’s Herald reporters Matt Stout and Erin Smith who won a Non-Deadline Reporting award for their coverage of the state’s dreadful foster care system. Congrats to both.

Crosstown, the Boston Globe’s David Abel won a Feature Reporting award for his piece, For Richard family, loss and love. Abel has yet to get a shoutout from the stately local broadsheet, but we’ll give him one here.

Elsewhere in Boston media, WBUR’s Asma Khalid and Shawn Bodden won a Digital Audio award for A Fear Of Going To School: 5 Former Boston Students Reflect On Busing. Kudos to that duo.

A nice haul for the locals, yeah?

Pick up today’s Boston Herald and here’s what you’ll find splashed across the bottom half of Page 3: 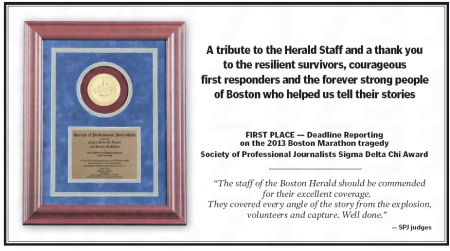 Meanwhile, kudos to both.

From the Boston Globe:

Nice, eh? Spread the love to WBUR and the Herald, even if the latter did catch a bit of an elbow:

And crosstown at the firsty local tabloid? Here’s how it played:

Actually, call it the frosty local tabloid. And call it a sore winner.