As the hardreading staff noted three weeks ago, both Boston Police Commissioner William Evans and Boston Mayor Marty Walsh rejected in no uncertain terms a WBZ-TV report that Evans was decamping for a job at Boston College.

Evans also gave a full-throated denial to the Boston Herald. Regardless, it’s no surprise to see this story just posted on the Boston Globe’s website.

Boston Police Commissioner William B. Evans, an avid runner who ran in the 2013 Boston Marathon and then played a key role in pursuing the bombers who attacked the race, will retire, clearing the way for his second-in-command to become the city’s first African-American commissioner.

Evans is stepping down to take over the public safety department at Boston College. He starts there on Aug. 6. His superintendent-in-chief, William G. Gross, will succeed Evans, becoming the first person of color ever to lead the department, which has 2,200 sworn officers.

What is a surprise is that the Globe piece by John R. Ellement and Milton J. Valencia makes no reference to Evans’s earlier duplicity. Crosstown at the Herald, Jules Crittenden’s piece gives it an oblique nod but no link.

Evans’ retirement and move to BC, rumored for weeks, was announced today at 10:30 a.m. at a press conference in the Eagle Room at City Hall, where Gross’ appointment as Mayor Martin J. Walsh’s permanent choice for the post was announced.

We get it that no one wants to be the skunk at the garden party. But c’mon, guys – isn’t that sort of your job?

Evans: I Hate These Rumors

An exasperated police Commissioner William B. Evans denied that he’s leaving his post as rumors about him departing to Boston College dogged the city’s top cop on the eve of one of the most violent times of the year.

Community leaders said the confusion about Boston Police Department leadership doesn’t help as neighborhoods gear up for a weekend before Fourth of July likely to see shootings in the city’s neighborhoods.

WBZ reported Thursday that Evans, who Mayor Martin J. Walsh named commissioner when he took office in 2014, was leaving to take over the Boston College police force. Walsh and Evans have furiously denied the reports and a BC spokesman said the university had no comment.

Crosstown at the Boston Globe, reporter Danny McDonald had a story about Evans, but not the story.

Boston police will have extra patrols in the city’s neighborhoods to deal with large parties in coming days, as the temperature heats up and the Fourth of July approaches, city officials said Friday.

Speaking at a press conference in front of the Twelfth Baptist Church in Roxbury, Boston Police Commissioner William

Evans said the holiday is “always a challenging time” for the department. Last year, 15 people were shot over July Fourth weekend in 10 separate incidents, said Evans.

“Traditionally, it’s been a violent weekend,” he said.

The department worries about large, loud parties throughout the city, as well as people setting off fireworks illegally, he said.

No word in the Globe, however, about whether the department worries about losing its leader.

Not surprisingly, both Boston dailies today covered the local reaction to the Ferguson grand jury (non)decision. 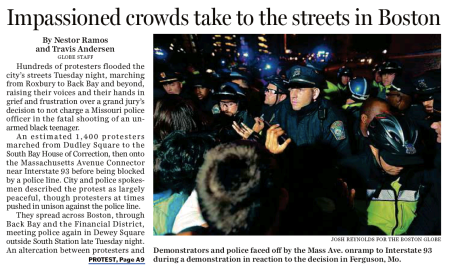 For the trifocal set:

Just for the record, the early edition that arrived at the Global Worldwide Headquarters featured a harder-edged take.

Raucous crowds take to the streets in Boston

In the pews and on the streets Tuesday night, full-throated cries of frustration and grief echoed from Roxbury throughout Boston and beyond over a grand jury’s decision to not charge a Missouri police officer in the fatal shooting of an unarmed black teenager.

An estimated 1,400 protestors marched from Dudley Square to the South Bay House of Correction facility, then shout down the Massachusetts Avenue Connector near Interstate 93 before being blocked by a police line. Protestors pushed in unison against police, some of whom were clad in helmets and protective gear.

The web version of the story is even softer than the late edition pictured above, especially the photo/caption. 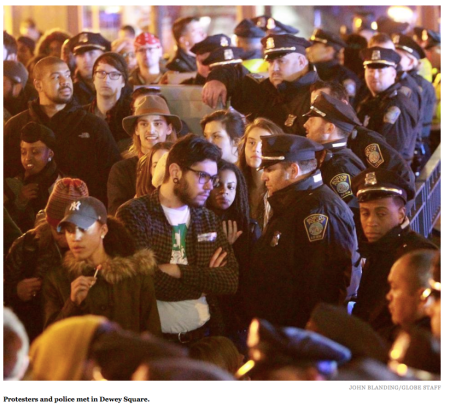 But all the versions have much the same information on the presence of high-ranking local politicians.

At the forum, Mayor Martin J. Walsh and Governor-elect Charlie Baker delivered brief addresses before ceding the microphone to others in the crowd . . .

As dozens watched on a video feed downstairs, Walsh and Baker said they came to the meeting to listen, learn, and comfort those still raging.

“One thing missing from Ferguson is the opportunity for people to grieve,’’ Walsh said. “I want to ensure the people of Boston feel safe and secure, and that we are respectful in addressing our feelings.”

And etc. (Baker wound up getting more play in the print edition than on the web.)

Notice anyone who’s missing? So did the Boston Herald.

Inside, Joe Battenfeld drops the hammer on the Bay State’s absentee governor.

Another of many missed chances for Deval

They all showed up, from  incoming Gov. Charlie  Baker to Mayor Marty Walsh to an expelled state rep, but the one pol who probably had the most to say to a packed crowd at the Twelfth Baptist Church was strangely absent.

Deval Patrick got elected because of his ability to connect and communicate with voters. But when the

nation’s only black governor had a chance to talk directly to frustrated and angry Boston residents in the aftermath of the St. Louis County grand jury decision, he skipped out of town.

The lame-duck governor was on a plane to Atlanta for an early Thanksgiving with the in-laws last night while a packed crowd vented at community meeting and protesters closed down streets last night over the non-indictment of a Ferguson police officer in the shooting death of Michael Brown.

Final tally: The feisty local tabloid tougher on protestors and Patrick. So what else is news?