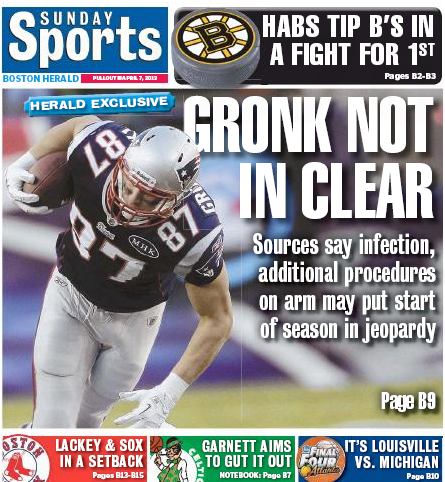 Wes Welker may not be the only important pass catcher Tom Brady is missing when the Patriots season begins in September. His biggest one may be absent as well.

According to multiple sources familiar with the situation, tight end Rob Gronkowski has been battling a stubborn infection in the area around where a second metal plate was installed to repair his broken left forearm and his readiness for the season is in jeopardy.

Crosstown rival Sunday Boston Globe had, well, nothing on the Gronkbeat in its print edition.

Gronkowski has infection and could need more surgery

Rob Gronkowski’s left arm continues to be a concern for the Patriots and their standout tight end.

The infection that led to Gronkowski undergoing a third surgery on the forearm has lingered, and according to league sources, he could be facing a fourth surgery if it does not clear up in the coming weeks.

If the infection continues, doctors could decide to remove the second plate he had placed in his arm because that could be the cause of the infection — but it is unknown at this point exactly what is causing the infection, one of the sources said.

Things could be further complicated if it is discovered that the infection has spread to other parts of the arm.

One thing that didn’t spread: Credit to the Herald for breaking the story.

Today’s Boston Herald is all Rob Gronkowski all the time.

Page One (via the Newseum’s Today’s Front Pages):

And just in case you haven’t absorbed the seriousness of the situation, here’s the back cover of the feisty local tabloid:

The only way to contain him

FOXBORO — There are matchup problems and then there are no-match-for-this problems. The latter is what Rob Gronkowski represented to the Indianapolis Colts yesterday.

Rob Gronkowski was the latter to the Colts. Whether the tight end continues to be a nightmare for future opponents remains to be seen since the Patriots [team stats] fear the Colts did to him what he did to the Colts, which is to say broke him.

As for the Boston Globe, how did they cover the Gronk out? Here’s the front page of today’s Sports section: 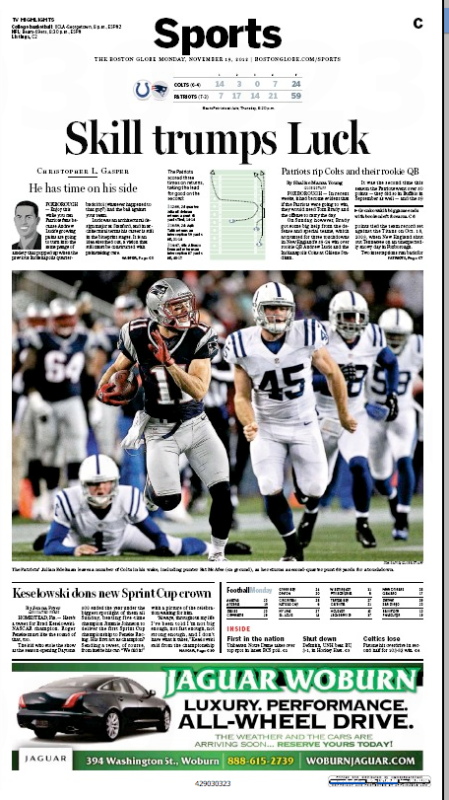 No? It’s a Gronking shame.