All Those Dollars and No Sense in Boston Mayoral Coverage

Start with the Boston Globe’s Page One Metro piece. 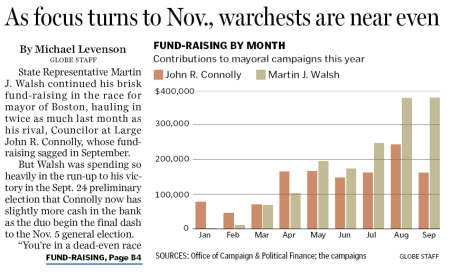 It’s what left that counts, though.

So, pretty much neck-and-neck, even-steven, whatever you want to call it.

Except at the Boston Herald, which calls it very differently.

Boosted by new infusions of union cash to his campaign war chest, state Rep. Martin J. Walsh is drubbing City Councilor John R. Connolly in their head-to-head fundraising clash, hauling in a staggering $381,000 in September — more than double the dough raised by his West Roxbury rival, both camps told the Herald.

Connolly and Walsh jockeyed for the top fundraising position throughout the preliminary race but last month was no contest as Connolly’s campaign reported raising just $163,000. Walsh beat that total in the first two weeks of September alone, when he raised $206,000, records show.

The piece focuses on “powerful unions — many of them out of state — [pouring] money into Walsh’s coffers.” Nowhere does it mention that Connolly now has more money on hand than Walsh does.

Now that the Bay State’s umpteenth U.S. Senate special election is done, the Boston news media can turn their attention to the first real mayoral race we’ve had here in Mayberry since 1993. 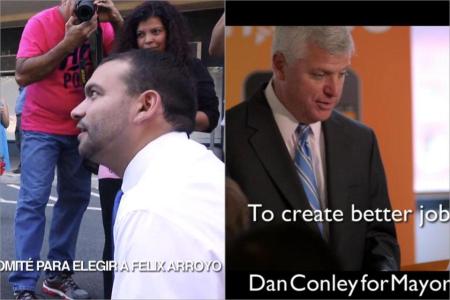 Boston mayoral candidate Daniel F. Conley, leveraging his significant fund-raising advantage over 11 opponents, will launch the first television advertising campaign of the race Tuesday, part of a sustained blitz that will continue through the Sept. 24 preliminary election.

Conley’s campaign has paid for five ads, at least four of which will begin running Tuesday on local and cable television stations. The Conley campaign declined to say how much it is spending on the ad campaign, making it difficult to determine the frequency and prominence of the ads.

The Suffolk district attorney’s ads will be quickly followed Thursday by a commercial buy from Felix G. Arroyo. The first ad from the Latino city councilor will be in Spanish and will air only on Spanish-language media.

And then there’s this:

The ads were produced by Joe Slade White and Co., a media strategy firm that has worked on campaigns with other Democrats, including Joe Biden when he was running for reelection to the US Senate from Delaware. Conley’s campaign has paid the company $23,000 for its work, according to campaign expenditures filed with the Massachusetts Office of Campaign & Political Finance.

First of all, $23,000 for producing five ads? Those guys need management.

Second of all, Joe Slade White and Co. is carpetbagging in this race. 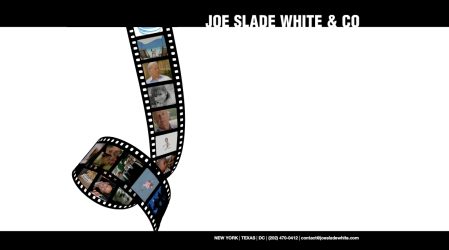 That’s New York/Texas/DC in the lower bar for oldies like us.

Then again, 23 grand doesn’t exactly put you on the radar screen.

The air war in the mayor’s race has officially begun as Suffolk District Attorney Daniel F. Conley launches a series of TV ads today and City Councilor Felix G.  Arroyo follows later this week with what may be the first Spanish-language-only ads in a Hub mayoral race.

Conley’s campaign is launching five new ads to begin airing on cable and local TV today. In one spot, created by a Portland, Ore., production company, he talks about “cracking down on illegal guns” and how he created a Suffolk County gun court that has a 90 percent conviction rate. Other ads focus on education and the city’s innovation economy.

(The web version of the piece calls it a “Buffalo, New York, production company” – no correction appended. The Herald doesn’t do corrections.)

Buffalo – Portland, Ore. (not even Maine?) – whatever. The ads were not produced in Boston.

Surprisingly, neither local daily made a big deal of it.

But the hardreading staff is.