Joseph Zingher’s back in town.

As the hardreading staff has dutifully noted, the Chicago lawyer has run ads twice in the local dailies pushing for disclosure of ATM crime statistics. In both cases Mr. Zingher invoked the name of Amy Lord, the 24-year-old South Boston woman brutally murdered last year. Mr.  Zingher essentially blames local politicians for her death, since they refuse to collect and publicize the ATM crime data that could force banks to change their policies.

Specifically, Zingher would like to see banks introduce ATM duress codes. Not coincidentally, Zinger holds a patent for one such code – a reverse PIN (U.S. Patent 5,731,575). For the record, he addressed that issue in an earlier post:

Regardless, Mr. Zingher has upped the ante with his latest ad, which ran in today’s Boston Herald.

Not sure what the “corporations are people” dog whistle is doing there, but Mr. Zingher zings a passel of local pols in his ad. Call the roll:

The most prominent name, though, is Amy Lord’s. The hardreading staff would never infringe on the Lord family’s privacy, but we’d sure like to know how they feel about Mr. Zingher’s ads. His protestation aside, they give us the creeps.

Here’s the ad he ran in the Globe in April.

And here’s his argument from the Herald ad (the Globe reference in the headline is largely playing to the cheap seats): 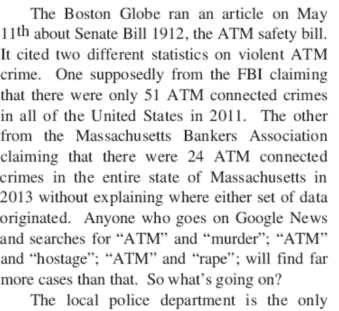 Sounds like a pretty good business model for Mr. Zingher too, yeah?

Automated teller machines are big business for the banking industry, and they protect their interests accordingly. Case in point: Massachusetts Senate Bill 1912. According to a piece last week at golocalworcester.com, “[t]he local ATM and banking industry is pushing back on an oft-submitted bill by Massachusetts State Senator Brian A. Joyce that would require banks to install specific security measures at their automated teller machine facilities.”

Justlikethat, this ad ran in today’s Boston Globe (yet another ad that snubbed the Boston Herald). 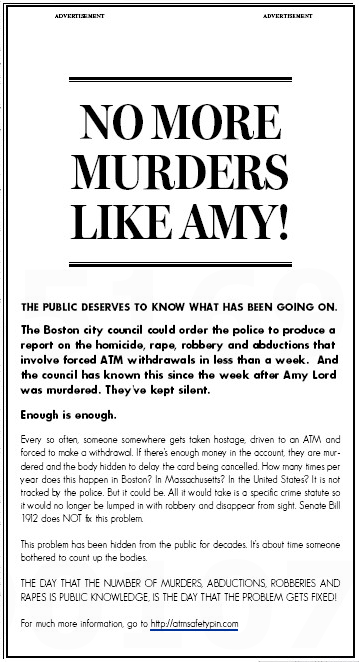 (More about the horrific murder of Amy Lord last year.)

When you go to atmsafetypin.com, here’s what you get:

It has taken a lot of lying by a lot of powerful people to keep the ATM crime problem hidden. And many of those people are still in office and pretend to be working to fix it. HINT: When you see educated, powerful people with high social standing behaving like common white trash, you know you got a problem.

An amendment was filed to the original Senate Bill 1912. (https://malegislature.gov/Bills/188/Senate/S1912) The first version of S.1912 had the BANKS reporting crimes at their ATMs. The problem was, banks don’t have 24 hour monitoring of their ATMs, so they don’t know if a crime occurred or not. They would have to go to the police to get that data. Worse yet, the law doesn’t punish banks for not complying, so it’s really a “nonlaw” . . .

There’s a lot more detail there if you care to dig deeper. There’s also a phone number, which the hardreading staff decided to call.

The man responsible for the ad, it turns out, is Joe Zingher, a Chicago lawyer who holds U.S. Patent 5,731,575, “Computerized system for discreet identification of duress transaction and/or duress access” at ATM banking machines.

When we asked Mr. Zingher what his connection was to Amy Lord or ATM crime, he said he’s been studying ATM crime for a long time and it’s easy to get hard data. When we asked directly if he had any financial stake in the reforms he’s proposing, he said he has a 15-year-old patent and “the idea I’m going to make any money off this is ridiculous.” (Not to get technical about it, but the idea didn’t seem so ridiculous in this 2004 Forbes piece, which noted that Mr.Zingher’s patent would “recognize reversed, inverted or otherwise altered PIN as a distress signal, and [instruct] the teller machine to call the cops.” The piece also mentioned Mr. Zingher’s dismay at being “flat broke” thanks to the banking industry’s stonewalling.)

Did we mention Mr. Zingher is a lawyer?  We thought so.