As the headscractching staff noted earlier, the Boston Herald only got half the story when it zealously reported yesterday about the boycott of the ALS Ice Bucket Challenge triggered by Jim Rigg, the superintendent of Catholic schools for the Archdiocese of Cincinnati.

What the feisty local tabloid missed was the new Anti-ALS Association Ice Bucket Challenge that directs donations to the John Paul II Medical Research Institute in Iowa City, which does not use embryonic stem cells in its research (the ALS Association does).

So now to today’s Herald,  which devotes a full page to the ALS rumpus – a news report by Lindsay Kalter and a column by Joe Fitzgerald – and still no mention of the competing challenge. 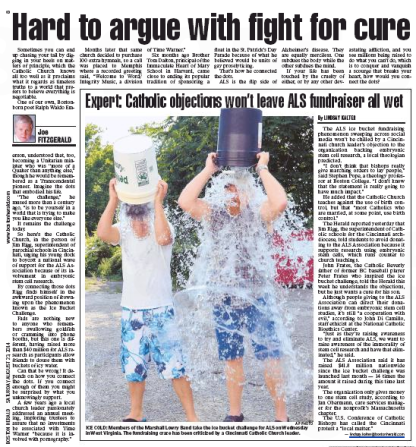 Hey, Heraldniks – do we need to come over there and write it for you? If so, you’ve really hit rock bottom.

The headscratching staff spent most of Friday trying to figure out this Boston Herald piece.

“I understand the Catholic dogma. I’m also conflicted with the teachings, I struggle with it, too. I just want my son cured,” John Frates told the Herald yesterday.

But the late-summer viral sensation — that has lured former presidents, celebrities and athletes — suffered a setback this week when Jim Rigg, the superintendent of Catholic schools for the Cincinnati Archdiocese, told students to stop any plans to donate to the ALS group because it supports research using embryonic stem cells, which violates the teachings of the church.

Okay, but why then does the Herald piece include this photo of Jim Rigg? 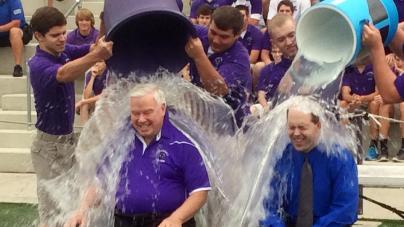 ‘SOCIAL MEDIA MIRACLE’: Jim Rigg, at right in the top photo, superintendent of schools for the Cincinnati Archdiocese, has counseled students not to donate to the ALS Association because of the church’s stem cell stance.

Nowhere does the Herald explain why Rigg is getting a bucket of ice water dumped on him if he opposes the ALS campaign.

The anti-ALS Association ‘cause’ was recently taken up by the Archdiocese of Cincinnati, which encouraged area Catholic schools to tell students to donate money to the John Paul II Medical Research Institute. The Institute does not use embryonic stem cells. Cincinnati Catholic schools superintendent Jim Rigg did just that when he took part in the ice bucket challenge on Thursday: