Hey – There Really IS a ‘Free Baker’ Shirt

The other day the hardreading staff noted the following regarding last week’s Target/Sully’s rumpus:

We’re not sure which t-shirt Target is in the process of discontinuing, but the retail chain should definitely consider dumping its Free Brady knockoff, which got Massachusetts Gov. Charlie Baker in ice water yesterday (via Boston Daily’s Kyle Clauss).

Anyone got a Free Baker t-shirt in the works?

Turns out someone did. From today’s Boston Herald:

Marty chills out for ALS

Boston Mayor Martin J. Walsh answered the ALS Ice Bucket Challenge thrown down by the governor — and may have one-upped him in the process.

Gov. Charlie Baker doused himself with a bucket of ice water on the steps of the State House on Monday to raise awareness and money for ALS research, and as is customary, challenged others to join him, including Walsh.

The mayor happily accepted, and yesterday he took the Ice Bucket Challenge outside City Hall, wearing a “Free Baker” T-shirt — a dig at the “Free Brady” T-shirt Baker wore earlier in the week.

Okay then. Proves at least someone is listening.

As the headscractching staff noted earlier, the Boston Herald only got half the story when it zealously reported yesterday about the boycott of the ALS Ice Bucket Challenge triggered by Jim Rigg, the superintendent of Catholic schools for the Archdiocese of Cincinnati.

What the feisty local tabloid missed was the new Anti-ALS Association Ice Bucket Challenge that directs donations to the John Paul II Medical Research Institute in Iowa City, which does not use embryonic stem cells in its research (the ALS Association does).

So now to today’s Herald,  which devotes a full page to the ALS rumpus – a news report by Lindsay Kalter and a column by Joe Fitzgerald – and still no mention of the competing challenge.

Hey, Heraldniks – do we need to come over there and write it for you? If so, you’ve really hit rock bottom.

The headscratching staff spent most of Friday trying to figure out this Boston Herald piece.

“I understand the Catholic dogma. I’m also conflicted with the teachings, I struggle with it, too. I just want my son cured,” John Frates told the Herald yesterday.

But the late-summer viral sensation — that has lured former presidents, celebrities and athletes — suffered a setback this week when Jim Rigg, the superintendent of Catholic schools for the Cincinnati Archdiocese, told students to stop any plans to donate to the ALS group because it supports research using embryonic stem cells, which violates the teachings of the church.

Okay, but why then does the Herald piece include this photo of Jim Rigg?

‘SOCIAL MEDIA MIRACLE’: Jim Rigg, at right in the top photo, superintendent of schools for the Cincinnati Archdiocese, has counseled students not to donate to the ALS Association because of the church’s stem cell stance.

Nowhere does the Herald explain why Rigg is getting a bucket of ice water dumped on him if he opposes the ALS campaign.

The anti-ALS Association ‘cause’ was recently taken up by the Archdiocese of Cincinnati, which encouraged area Catholic schools to tell students to donate money to the John Paul II Medical Research Institute. The Institute does not use embryonic stem cells. Cincinnati Catholic schools superintendent Jim Rigg did just that when he took part in the ice bucket challenge on Thursday:

Hark! The Herald! (I’s on the Prize Edition)

It’s all hands on deck at the feety local tabloid today. First sports columnist Steve Buckley decides to get into the Marathon mix.

I wish I had video highlights of Pete Frates’ entire baseball career.

If I did, I’d seek out the longest home run he ever hit, the greatest catch, and the hardest, dirtiest takeout slide he ever made at second 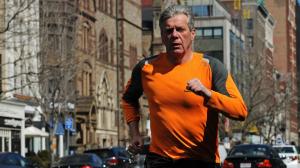 base, and then I’d somehow combine them into one rock-’em-sock-’em, in-your-face Pete Frates Baseball Moment.

And even then, it would look like a game of backyard ring toss compared with the aggressiveness and determination that Pete is showing in his fight against amyotrophic lateral sclerosis, otherwise known as Lou Gehrig’s disease.

As he has done with so many others, Pete Frates, a Beverly native and former Boston College baseball captain, has inspired me to help him help find a cure for ALS.

Who doesn’t dream of dancing on Broadway?

Until yesterday, the closest I came was a few birthdays ago when I went to see the rock musical “Hair.” At the end of the show, the cast

invited audience members on stage to sing and dance to “Let the Sunshine In.”

I was in heaven.

So I was thrilled — and very nervous — to get yesterday’s assignment: Take part in a master dance class taught by the dancers of “Heartbeat of Home” — a new dance sensation by the producers and director of the Broadway hit “Riverdance” — opening today at Boston’s Citi Wang Theatre.

Thereby producing a nifty piece of newsvertising for the show.

Those crosstown Globeniks better step lively if they want to keep up.

UPDATE: Apologies to our Walt Whitman desk for not crediting it earlier.